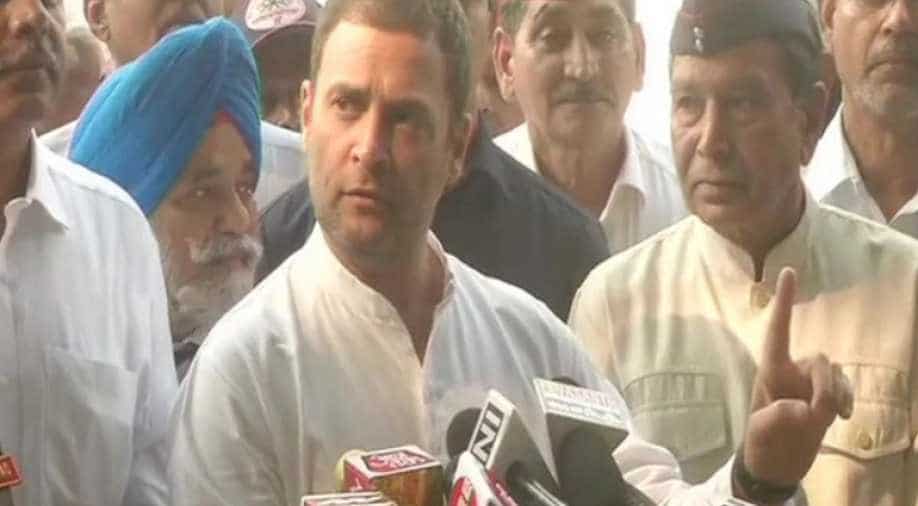 Congress president Rahul Gandhi on Saturday held an interaction with ex-servicemen where a number of issues, including the Centre's One Rank One Pension (OROP) scheme and the Rafale deal were discussed.

Briefing press after the interaction, Rahul attacked the central government for failing to implement the OROP as per expectations of ex-servicemen.

He further raked up the issue of Rafale deal and criticised the government for ignoring the welfare of former service personnel.

"During the discussion, the situation in Jammu and Kashmir, the wrong non-strategic approach of the government, the division that has been created there and the cost that is being paid by our soldiers came up. Rafale came up. These things are connected. The connection is that Anil Ambani can be given Rs 30,000 crore for doing nothing, but our soldiers can't be given OROP. This is the connection- Rs 30,000 crore is more than enough to solve the OROP problem,” said the Gandhi scion.

The situation in J&K,wrong non-strategic approach of govt, & the cost that is being paid by our soldiers came up. Rafale came up. These things are connected. Connection is that Anil Ambani can be given Rs 30,000 cr for doing nothing, but our soldiers can't be given OROP: R Gandhi pic.twitter.com/cgCoGkN2Cg

Continuing his analogy between OROP and India’s fighter jet deal with France, he said, “OROP can be implemented in Rs 8,300 crore, but instead, Rs 30,000 crore is being given to Anil Ambani without experience, without any background."

Gandhi further said that the way India's ex-servicemen are being treated is wrong and the government has to change its way of functioning.

During the hour-long interaction, the ex-servicemen submitted two memoranda to the Congress President for his review.