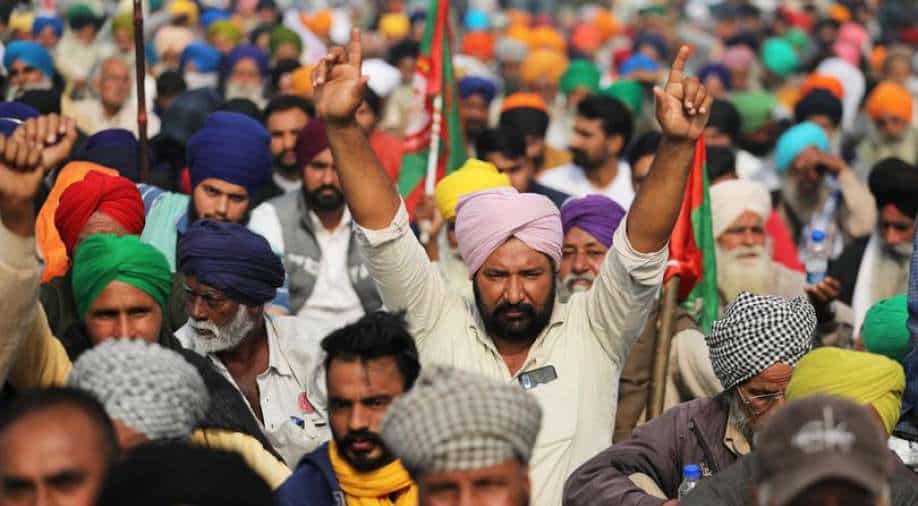 The repeal of these three legislations has been one of the key demands of around 40 farmer unions protesting against these reforms for nearly a year now. Photograph:( Reuters )

A debate in a UK parliamentary committee room earlier this week over the issue was condemned by India as “gross interference in the politics of another democratic country” and even led to Foreign Secretary Harsh Vardhan Shringla calling in British High Commissioner Alex Ellis for a meeting.

India as a democracy has guaranteed the right to protest throughout and the farmers’ protests over agricultural reforms is an issue that is “absolutely and totally” a matter for the government of India, UK minister Lord Tariq Ahmad said on Friday ahead of his visit to New Delhi.

A debate in a UK parliamentary committee room earlier this week over the issue was condemned by India as “gross interference in the politics of another democratic country” and even led to Foreign Secretary Harsh Vardhan Shringla calling in British High Commissioner Alex Ellis for a meeting.

Lord Ahmad, the minister of state responsible for Indian affairs in the UK Foreign, Commonwealth and Development Office (FCDO), will begin his five-day visit to India on Monday.

“It was a very cordial meeting. It was the first time they were formally meeting and whilst the issue of the protests was discussed and India made clear their position, we have also reiterated the point that the parliamentary scheduling of debates and the nature of our parliamentary democracy is such (but) the government's position can be made very clear too,” he said during a virtual pre-visit interaction with reporters here.

“The protests have been taking place for several months now and India as a democracy has totally guaranteed and secured the right to protest, which we fully acknowledge. I equally fully want to endorse, and regularly articulate, that the principle of the farmers' protest in terms of the actual nature of it is absolutely and totally a matter for the government of India. That position has been longstanding and has not changed,” he said.

The minister categorically ruled out any scope of the matter overshadowing his extensive schedule in India, which covers ministerial meetings in New Delhi, followed by interactions with regional and community leaders in Chandigarh, Chennai and Hyderabad before concluding with trade talks in Mumbai.

The visit is seen as further finalising the groundwork for the forthcoming tour of UK Prime Minister Boris Johnson, who is scheduled to visit India in the coming weeks ahead of the G7 summit in Cornwall in June.

“The intense programme underlines the importance of our strong relationship with India. It follows on from our ongoing senior-level engagement at ministerial level. We look forward to the Prime Minister's (Johnson) visit in advance of Prime Minister (Narendra) Modi visiting as part of the G7,” the minister said.

“Our relationship with India is not just one of bilateral importance, it's also about how these two countries are working together and there's no better illustration than the current Covid-19 pandemic which grips us… The role that India has played as the pharmacy of the world has been phenomenal.

“We've been extremely collaborative in our approach to this and publicly acknowledged the role India played in unlocking certain other pharmaceuticals, including the delivery of paracetamol,” Ahmad said.

With reference to planned supplies of a batch of Covishield vaccines from the Serum Institute of India to the UK, the minister reiterated that it symbolised the wide range of bilateral ties and would not impact both countries’ commitment to ensuring supplies to more vulnerable regions through the UN-led COVAX facility.

“We work together with India on securing domestic supplies but that hasn't taken away from our commitment through Gavi (the Vaccine Alliance) to the COVAX facility. India, through the likes of the Serum Institute of India, are absolutely integrated to ensure the supply of that,” he said.

Ahmad’s visit to India will coincide with the UK’s release of the government’s Integrated Review into its post-Brexit foreign policy priorities next week, which is widely expected to confirm a so-called Indo-Pacific tilt in favour of countries like India.

While not wanting to be drawn into the specifics of the review, the minister said: “It can be taken as read in as much as government policy is concerned, there is a very strong belief and focus on the Indo-Pacific tilt and it’s right we do so. When you look at the countries within that part of the region, India is foremost in our minds.”

This will be the latest in a series of high-profile UK visits to India in preparation for Prime Ministers Johnson and Modi signing off on a highly-anticipated UK-India Enhanced Trade Partnership, which is seen a precursor to a wider free trade agreement (FTA) in the future.

Farmers, mostly from Punjab, Haryana and western Uttar Pradesh, have been camping at several Delhi border points, including Tikri, Singhu and Ghazipur, since November 28, demanding a complete repeal of the three farm laws and a legal guarantee on the minimum support price for their crops.

The Indian government has denied allegations that it was trying to put an end to the Minimum Support Price (MSP) and the mandi system.

Multiple rounds of talks between the government and farmer unions have not been able to resolve the deadlock.

India has emphasised that the protests by farmers must be seen in the context of India's democratic ethos and polity and the Ministry of External Affairs said that some vested interest groups have tried to mobilise international support against the country.

"Before rushing to comment on such matters, we would urge that the facts be ascertained, and a proper understanding of the issues at hand be undertaken," it said last month.