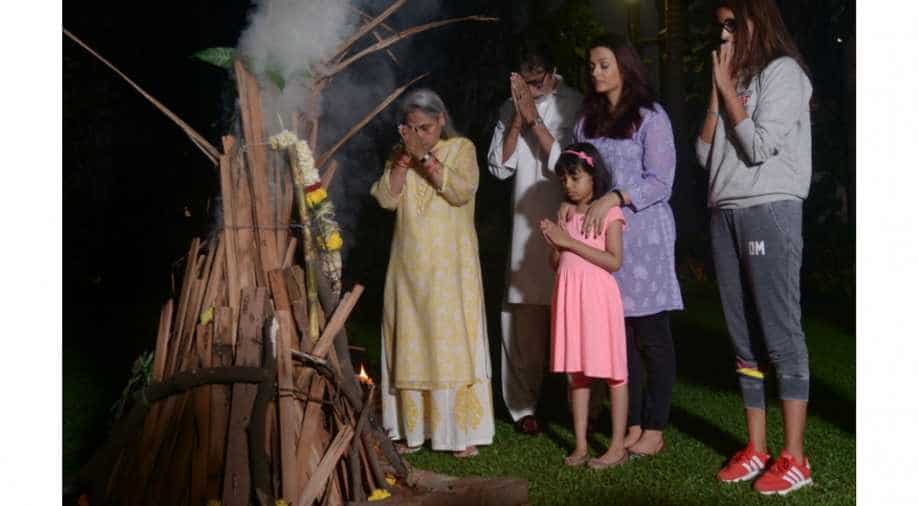 Amitabh Bachchan and family take part in burning of Holika on the Holi eve. Photograph:( Twitter )

The festival of colours is here and Bollywood, unlike every year, is not gearing up for extravagant Holi parties owing to the sudden demise of veteran actress Sridevi on February 24 in Dubai. As she was laid to rest on February 28 amid the presence of the entire entertainment industry at her funeral, most Bollywood families have announced almost no parties or sober ones.

Amitabh Bachchan on March 1, Holi eve took to Twitter to share some pictures of Holi celebrations at his residence in Mumbai and they are proof that Bollywood is in no mood for fun right now.

In pictures, Bachchan and his family including wife Jaya, daughter Shweta, daughter-in-law Aishwarya and grand-daughter Aaradhya were seen in front of the burning of Holika, applying tilak on each other's foreheads and eating some Holi delicacies in front of the pyre. Interestingly, Abhishek Bachchan was missing from the pictures.

Earlier, he tweeted a message to his fans, writing: "Happy Holi .. the colours of life be within you ever .."