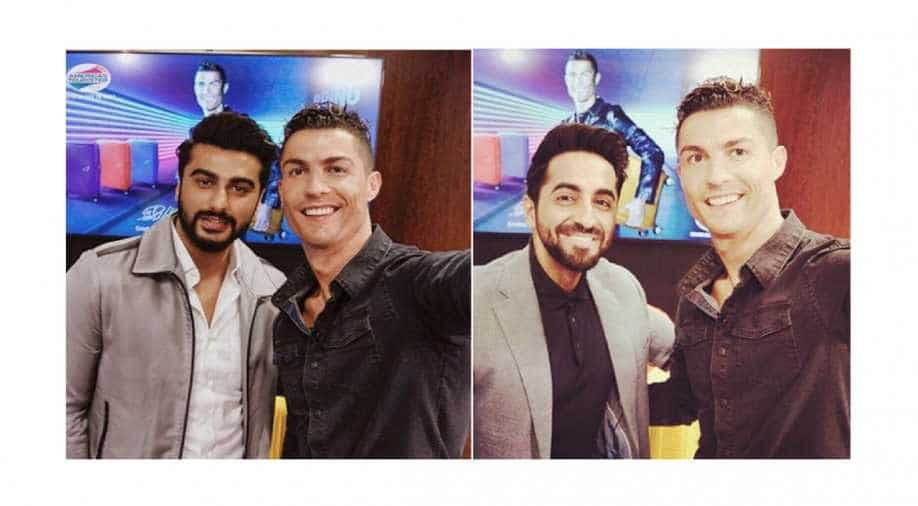 Bollywood actors Arjun Kapoor and Ayushmann Khurrana met with football legend Cristiano Ronaldo in Madrid on May 16 as the two shared photos on their respective social media profiles. It so turned out that both Arjun and Ayushmann had some work in Madrid while Cristiano was in the same city as he is gearing up for UEFA Champions League final match between Real Madrid and Liverpool on May 27 in Kiev, Ukraine.

The two young actors had a great time interacting with Cristiano as they spoke about his impending visit to India, Cristiano’s interest in movies, football and more. Ayushmann was on a brand shoot for American Tourister -- a brand that Cristiano endorses too. Their meeting was arranged by the brand itself.

Meanwhile, when Arjun met the footballer, he invited him to come visit India as he has a massive fan following back home. Cristiano to this added that he “would love to come to India” as he is “aware of how much the fans here love him”.

The picture everyone's been waiting for... It was amazing meeting one of the greatest football players! @Cristiano @AMTouristerIN - it was truly such a #HardToLetGo moment just like my #Curio!

Amazing feeling meeting & talking football with @cristiano !!! Heck of a player, heck of a guy. All the best for Kiev & Russia. Thank you @amtouristerin for this... Truly #HardToLetGo #AmericanTourister #Curio

Arjun Kapoor will be next seen in Namaste England, Sandeep Aur Pinky Faraar and India’s Most Wanted.