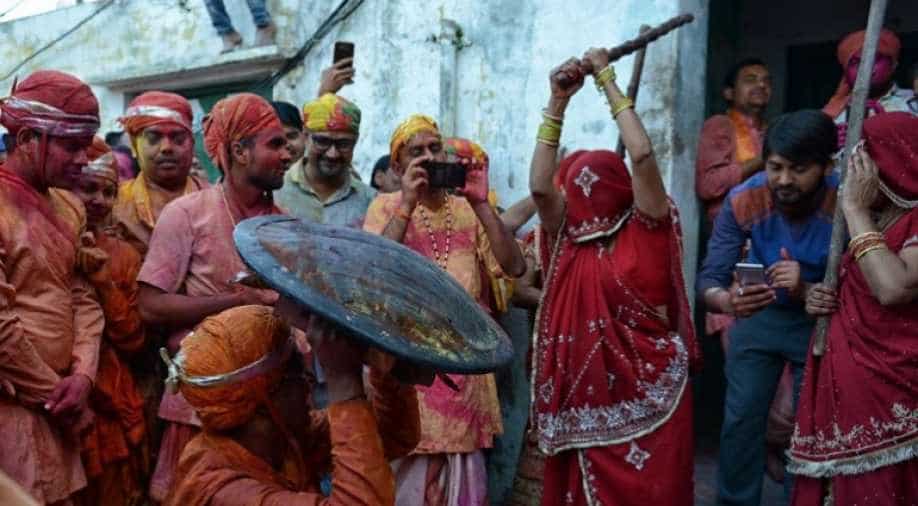 Though the way of celebrating the festival differs from state to state, but the spirit and enthusiasm remain the same.

Holi, also known as the festival of colours, is one of the most important festivals celebrated in the country.

Clouds of colours in the air, kids running armed with pichkaris, gulal smeared faces, bhang spiked thandai, gujia and dahi vadas beautifully served in plates is how Holi is celebrated in different ways in India.

Though the way of celebrating the festival differs from state to state, but the spirit and enthusiasm remain the same.

There are multiple ways Holi is celebrated across the nation. Let’s have a look at them.

The moment we hear the word Holi, we correlate it with Vrindavan and the Braj region. Traditionally associated with Lord Krishna, the localities in the Braj Region, like Agra, Mathura, Nandgaon, Vrindavan, and Barsana, are the major tourist attractions during the Holi season.

In these localities, especially in Barsana, people celebrate Lath mar Holi in the Radha Rani temple’s compound. In this ritual, women beat up men with sticks (Lathi) as the men sing Holi songs. This unique form of celebration denotes men singing to gather women’s attention and women protecting themselves by chasing men away with sticks.

The uniqueness of the Kumaoni Holi lies in its being a musical affair in the form of Baithki Holi, Khari Holi and the Mahila Holi. The Baithki Holi and Khari Holi are unique in that the songs on which they are based have a touch of melody, fun and spiritualism. These songs are essentially based on classical ragas. No wonder then the Baithki Holi is also known as Nirvana Ki Holi or Holi of Salvation.

Hola Mohalla or Hola Mahalla or simply Hola is a Sikh festival that takes place on the first of the lunar month of Chet which usually falls in March. This, by a tradition established by Guru Gobind Singh, follows the Hindu festival of Holi by one day.

On this three-day grand festival, mock battles, exhibitions, display of weapons, etc., are held followed by kirtan, music and poetry competitions. This festival is observed by Nihang Sikhs. They exhibit martial arts and sing their hearts out on this day, that is usually celebrated a day before Holi.

Holi is known as Dol Purnima in Bengal and Orissa, celebrated in most sophisticated style by using dry colours.  A concoction of Chau dance, Darbari Jhumur and Nature dance to the indigenous tunes of West Bengal's wandering Baul musicians set a mood so surreal that it is hard to put it in words.

Shigmo parade is a religious Hindu festival filled with colours, music, dance and floats. It depicts the life of a Goan in elaborate traditional folk dances like Ghode Modni and Fugdi performing on streets in massive troupes along the procession, showcasing the tradition of Goa. The streets of Goa during Shigmotsav are lit up with attractive décor, lively parades, delicious Goan delicacies, and music and dance performances.

In Manipur, Holi or Yaosang is celebrated for six days. It starts on the day of the full moon and combines Hindu and indigenous traditions. The highlight of the festival is the Thabal chongba, a Manipuri folk dance that is performed during. To add to the traditions and maintain uniformity, the Hindus of Manipur play this festival with colours too.

Kerala celebrates its own version of Holi in the form of Ukuli or Manjal Kuli. The festival is not so popular across the state, however, it is the traditional celebration that is prevalent amongst the Konkani and Kudumbi communities in the region that shouldn't be missed. The primary colour used in Manjal Kulli is turmeric.

Assamese called Holi as Phagwah which is celebrated with a lot of joy and excitement for 2 days. On the 1st day, mud huts are burnt representing the fable of Holika Dahan. On the 2ndday, the natives make merry it with colours similar to others!

Colour merriment happens on the 5th-day post-Holika Dahan and is known as Rang Panchami. Huge processions of coloured people march in the city and celebrate Rang Panchami which is also known as Holi Krishna.

In Udaipur, the festival of Holi spells class and imperiality. From Holika Dahan, fireworks to spraying colours, all rituals and celebration take place. Holika Dahan marks the beginning of Holi celebration in India. It takes place in City Palace in Udaipur. The royal family of the Mewar dynasty is keeping their annual tradition alive till date.