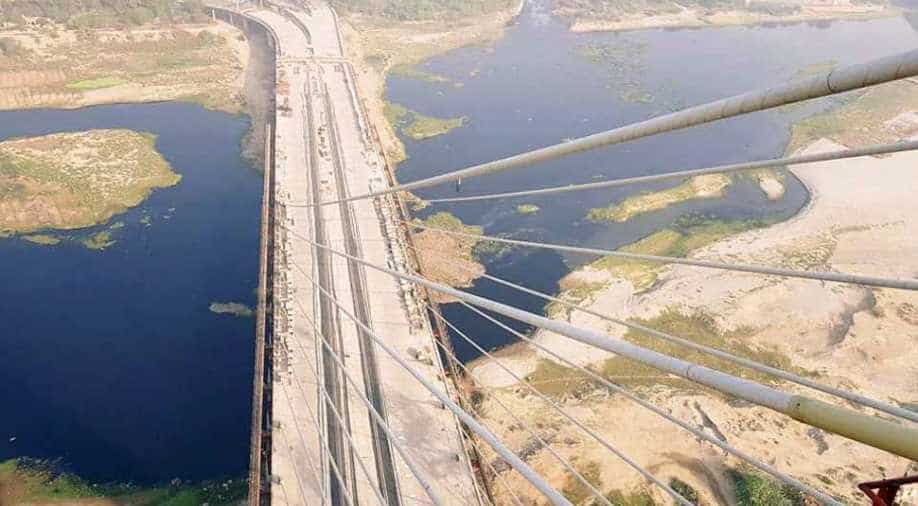 High drama prevailed before the inauguration of the bridge with Delhi BJP president Manoj Tiwari and scores of supporters staging a protest for allegedly not being invited to the event.

The Signature Bridge in Delhi over the Yamuna was inaugurated amid a surcharged atmosphere on Sunday with Chief Minister Arvind Kejriwal attacking BJP and Prime Minister Narendra Modi, saying the country needs bridges, schools and hospitals not temples and statues for progress.

High drama prevailed before the inauguration of the bridge with Delhi BJP president Manoj Tiwari and scores of supporters staging a protest for allegedly not being invited to the inaugural event of the newly-built city landmark. They also had a "scuffle" with some AAP workers.

"Four days ago the 182 metre tallest statue of the world was unveiled and today this 154 metre high bridge is being inaugurated. The country has to decide if it needs statues and temples or bridges, schools and hospitals," Kejriwal said inaugurating the bridge.

He said the thought of Signature bridge reminded him of the first Prime Minister of the country Jawahar Lal Nehru.

"If Nehru had chosen to build temples and statues instead of institutions like BHEL and SAIL, then the country would not have progressed. The country would languish in 15th century if temples and mosques are given preferences over science, technology and research," Kejriwal said.

He alleged that in order to stop his government from completing the bridge, the officials and engineers were issued threats of CBI raids against them.

"The Signature bridge has been completed only because there is an honest government in Delhi," Kejriwal asserted.

Deputy CM Manish Sisodia also alleged that "obstacles" were raised by the Modi government so that the Signature bridge was not completed in the rule of AAP government in Delhi.

"If Modi government had contributed one inch to this bridge, I would myself chant Modi-Modi like those who are showing black flags," he said referring to BJP supporters who were camped nearby along with Manoj Tiwari.

In a direct attack on Tiwari, Sisodia said if he was "so fond of" going to inaugurals then he should work constructively.

"It is Modi government's rule that the CM of elected government in Delhi will not be invited to any inaugural function. We deliberately did not invite (Tiwari)," Sisodia said claiming no one from Delhi government was invited at inauguration of Skywalk at ITO.

Earlier Sunday, Tiwari and his supporters allegedly entered into a scuffle with AAP members and staged a protest for not being invited to inaugural event.
Kejriwal and his deputy Manish Sisodia were not present when the protest took place.

"Our staff on duty at the place of function performed their task with utmost restraint and diligence. Though there was slogan shouting but police segregated the groups and did not allow any clash or violence to take place," he said.

"The situation was handled very professionally by Delhi Police and not allowed to take an ugly turn," Yadav added.

Tiwari is MP from North East Delhi and the bridge comes in his constituency.