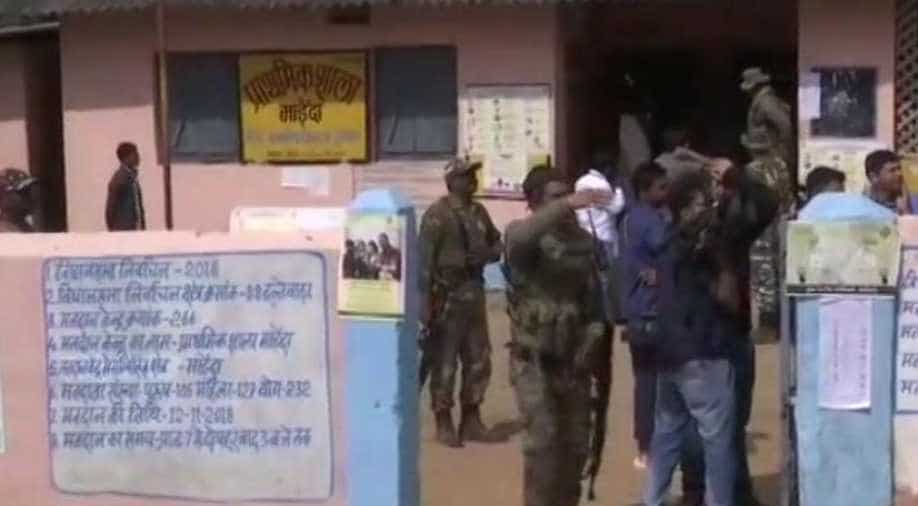 People in Dantewada's Madenda village cast their votes even after threat from the Naxals. Locals say, 'there are 263 registered voters in the village and many are voting even after the threat.' Photograph:( ANI )

As many as 18 assembly constituencies, out of a total of 90, have gone to polls today in the first phase in the electoral fight marred by Naxal attacks.

The voter turnout in the first phase of Chhattisgarh assembly election on Monday was recorded at 56.58 per cent till 4.30pm. By 2pm the same was recorded at nearly 38 per cent, the figure rose to nearly 50 per cent by 3pm.

As many as 18 assembly constituencies, out of a total of 90, have gone to polls today in the first phase of the electoral fight marred by Naxal attacks.

Voting in nine seats of Bastar division and one seat in Rajnandgaon district began at 7am and concluded at 3pm, while in the other eight seats, it started at 8am and will culminate at 5pm, news agency PTI reported.

47.18% voter turnout recorded till 3 pm in the first phase of #ChhattisgarhAssemblyElections2018. pic.twitter.com/dJVvqC53OZ

As many as 31 electronic voting machines (EVMs) and 51 voter-verifiable paper audit trail (VVPAT) machines were replaced due to technical snags, an official said.

A thick security blanket comprising over 1.25 lakh police and paramilitary personnel were thrown across the 18 constituencies as they fall under the Naxal-hit areas of Bastar, Kanker, Sukma, Bijapur, Dantewada, Narayanpur, Kondagaon and Rajnandgaon districts.

After the Nilwaya naxal attack, the challenges have gone up. Naxals had threatened villagers against voting. We assured the villagers of a secure environment, put in place a three level security so that people can vote without fear:CRPF official #ChhattisgarhAssemblyElections2018 pic.twitter.com/gqV7H5Vb4F

Meanwhile, security forces detected three IEDs (Improvised Explosive Device) near a polling booth in Konta's Banda in Sukma district. According to reports, two jawans of Commando Battalion for Resolute Action (CoBRA) were injured on Monday in an encounter that broke out between security forces and Naxals in Bijapur's Pamed area.

As many as 190 candidates are in the fray and as many as 4,336 polling booths have been set up where 19,079 polling personnel are deployed in the first of Chhattisgarh assembly polls.

The remaining 72 seats of Chhattisgarh assembly will go to vote on November 20 as part of a multi-phased voting across five states that also include neighbouring Madhya Pradesh, Rajasthan, Telangana and Mizoram.