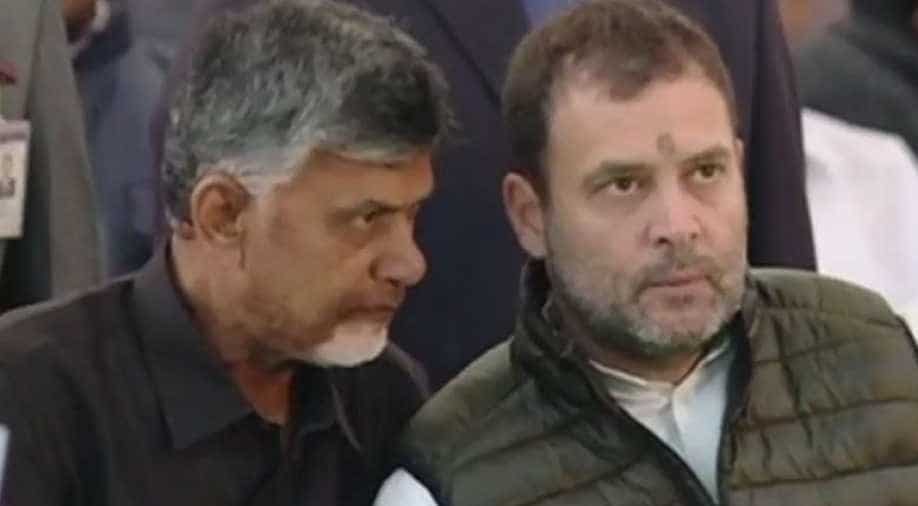 Bringing his battle for special status for his state to the national capital, Andhra Pradesh Chief Minister N Chandrababu Naidu Monday went on a daylong fast that became a rallying point for opposition unity for the second time in less than a month to fight the BJP ahead of the Lok Sabha polls.

Shiv Sena's Sanjay Raut also made a surprise appearance at Naidu's 'Dharma Porata Deeksha' (day-long protest for justice) that began at 8 am. Raut said he came to attend the event as a representative of the Shiv Sena, amid strains with senior ally BJP.

The leaders in their brief speeches mounted a scathing attack on Prime Minister Narendra Modi on a range of issues, notably the Rafale deal, with Kejriwal going to the extent of accusing him of behaving like "PM of Pakistan" and not of India in the way he treats state governments led by opposition parties.

Reacting to Kejriwal's barb, BJP's national secretary and co-in-charge for Andhra Pradesh Sunil Deodhar said the leaders of the 'grand-alliance' are competing with each other on who can be more abusive towards Modi.

Naidu, who is trying to unite opposition parties, has over the last three months, held a number of meetings with opposition party leaders on forming an anti-BJP front. The TDP pulled out of the NDA government in March last year over its refusal to grant special status to Andhra Pradesh.

Demanding that the Centre fulfil promises made during Andhra Pradesh's bifurcation in 2014, the TDP president alleged that Modi was not following 'raj dharma' by denying the state special status.

"(Former PM) Atal Bihari Vajpayee said 'raj dharma' was not followed in Gujarat (during the 2002 post-Godhra riots). Now, 'raj dharma' is not being followed in the case of Andhra Pradesh. We have been denied what is rightfully ours," Naidu said.

He alleged that the central government did grave injustice to Andhra and it would have "repercussions on national unity".

"On behalf of five crore people, I'm warning this government... I came here to remind you of the promises made in the AP Reorganisation Act."

Naidu's fast also came ahead of the mega rally of non-BJP leaders under the aegis of Delhi's ruling Aam Aadmi Party(AAP) against the Modi government on February 13 in the national capital.

Against the backdrop of Naidu's dharna, BJP president Amit Shah wrote an open letter to people of Andhra Pradesh, saying the TDP chief knows that his political fortunes are declining rapidly and is back to theatrics in his desperation for grabbing headlines.

Shah accused Naidu of breaking the trust of the people and said he is going too far by "personally" attacking the prime minister.

Naidu's "delusional politics" is about to end, he said.

The TDP leader Sunday dragged Modi's wife while attacking the prime minister. Naidu claimed he had done so as Modi had referred to his son in targeting him at a rally.

"The prime minister has stolen from the people from Andhra Pradesh and he has given that money to Anil Ambani. That is the fact of the matter," Gandhi alleged in an apparent reference to the controversial Rafale fighter jet deal with France.

The government and Ambani have rejected Gandhi's allegations of corruption in the deal.

In just a couple of months, opposition parties will show Modi exactly what the sentiment in the country is, he said.

"I want to let you know that we are all standing together. We are going to defeat the BJP...," he added.

O'Brien recalled Modi's speech in Guntur in Andhra Pradesh on Sunday and said he didn't talk about development or special category status but "started a personal attack".

Modi, who was on his first visit to the state after the TDP walked out of the NDA government, came down heavily on Naidu, whom he repeatedly referred to as "father of N Lokesh."

Lashing out at the prime minister, Abdullah said, Modi has stooped so low. He's making personal attacks against Naidu, who is doing great service for the country.

Memon alleged that the Central government was meting out step-motherly treatment to Andhra and the BJP was attacking Naidu because he has taken the lead in uniting rival parties against it.

Mulayam Singh Yadav said he was not well but had come to endorse Naidu's stand.

"Naidu is fighting the battle for the poor, the farmers and all those who are oppressed," he added.

Stating that Naidu was fighting for a just cause, DMK leader Siva predicted that the Modi government would be ousted in three months.

Sharad Yadav blamed the Modi government for unemployment, joblessness which he said were a result of demonetization.

Kejriwal hit out at the prime minister over the alleged mistreatment meted out to states being run by governments of opposition parties.

The way PM Modi treats governments of opposition parties in states, he behaves like he is not the PM of India but PM of Pakistan, he said.

Congress leaders Anand Sharma, Ahmed Patel and Jairam Ramesh were also at the venue to express their support.

Naidu paid tributes to Mahatma Gandhi at Raj Ghat and at Ambedkar Statue at the Andhra Bhavan before he began the hunger strike.