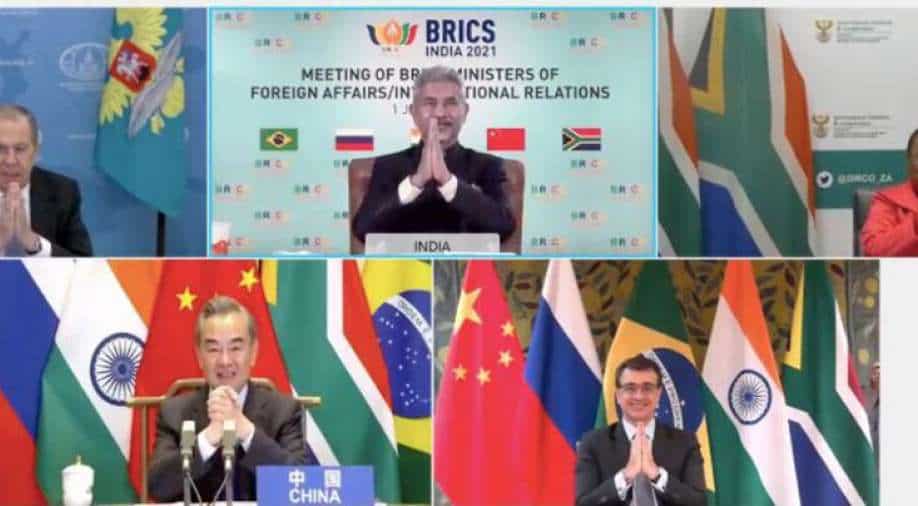 The joint statement after the meet said that the ministers 'reaffirmed the need to use all relevant measures during the pandemic'.

In a significant step forward, the BRICS grouping comprising of Brazil, Russia, India, China, and South Africa have backed the India-South Africa joint proposal for COVID-19 vaccine waiver at the World Trade Organisation(WTO).

The grouping decided to back the proposal at the BRICS foreign ministers virtual meet which was held under the chairmanship of India.

The joint statement after the meet said that the ministers "reaffirmed the need to use all relevant measures during the pandemic" which included "supporting ongoing consideration in WTO on a COVID-19 vaccine Intellectual Property Rights waiver" and "use of flexibilities of the TRIPS agreement and the Doha Declaration on TRIPS Agreement and Public Health".

BRICS is one of the first global multilateral groupings to come in the support of the proposal. The US earlier this year had extended its support to it leading to other countries in the West, including the European Union(EU) dropping its hesitation on the proposal.

The proposal once accepted means large scale production of vaccines at a time when the world is facing serious storages amid the pandemic which is now in its second year.

The BRICS also called for urgent reforms of global bodies such as the United Nations and in a first released "BRICS Joint Ministerial Statement on Strengthening and Reforming of the Multilateral System".

The joint statement said that they were "recommitted to instil new life in the discussions on the reform of the UN Security Council and continue the work to revitalise the General Assembly".

BRICS has two permanent members of the UNSC - China and Russia. While calls have been growing for urgent reforms at the top at the UN body, progress has been slow.

BRICS has agreed on six principles as guides amid growing calls for multilateral institutions.

The statement not only focuses on reforms at the UN but also the International Monetary Fund (IMF), World Bank (WB), World Trade Organization (WTO), World Health Organization (WHO).

The meet also discussed Afghanistan and Myanmar. The FMs called for an immediate, permanent, and comprehensive ceasefire in Afghanistan, while on Myanmar it voiced support to the recent ASEAN initiative and the implementation of its five-point consensus.

India as the chair of the grouping will hold the summit later this year. So far 50 events have taken place under its chairmanship. It is the third time India is holding the BRICS chairmanship after 2012 and 2016.