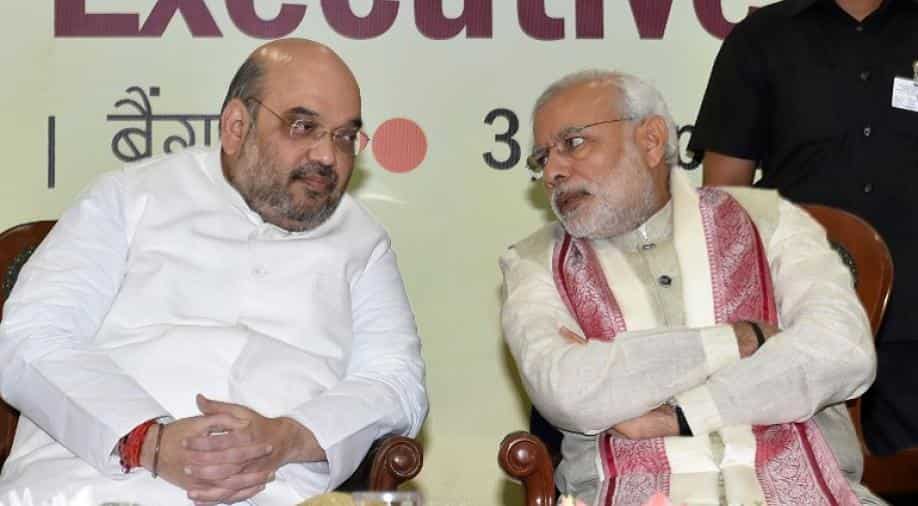 Election in-charges are trusted lieutenants of the party's central leadership and their job is to be a bridge between it and state units, elicit feedback from grassroots and craft and execute poll campaign while being at the background.

The BJP top brass has relied on a mix of electoral experience and organisational ability in picking its team of state in-charges to drive the party's 2019 Lok Sabha poll campaign, and as expected from the Modi-Shah duo, they have sprung a few surprises as well with the Hindutva agenda being at the core of the choices.

Prime Minister Narendra Modi and party president Amit Shah have entrusted Gordhan Zadaphia, a fellow Gujarati who was long a bitter Modi critic, with the responsibility of Uttar Pradesh, a state where BJP's performance will be central to its dream to retain power at the Centre.

Election in-charges are trusted lieutenants of the party's central leadership and their job is to be a bridge between it and state units, elicit feedback from grassroots and craft and execute poll campaign while being at the background.

Here is a profile of leaders chosen as in-charges for 17 states and Union Territory of Chandigarh.

Gordhan Zadaphia: He had a big fallout with Modi in 2004 when he refused to take oath as minister. He later floated his own party and joined hands with likes of former state CMs, Keshubhai Patel and Suresh Mehta, to take on Modi.

He returned to BJP before 2014 Lok Sabha polls. What is, however, unquestionable is the 64-year-old leader's Hindutva credentials as his ties with RSS and VHP always remained strong.

The junior home minister in Gujarat government during 2002 riots, Zadaphia has already set a target of winning all 80 seats of UP, where BJP had won 71 seats in 2014.

Incidentally, Shah was UP in-charge in 2014.

Bhupender Yadav: A party general secretary, he will be in charge of Bihar. A lawyer and key party spearhead in Parliament, Yadav has been involved with almost every state election in some way since Shah became BJP chief in 2014.

A low profile leader, he enjoys Shah's trust and has long been in-charge of party affairs in Bihar.

His job will be to iron out any differences with allies— CM Nitish Kumar's JD(U) and Union minister Ram Vilas Paswan's LJP. NDA had won 31 of the state's 40 seats in 2014.

Mahendra Singh: A minister in UP government, BJP has appointed him election in-charge for Assam. Party came to power in the state for first time in 2016, with him as in-charge.

Arun Singh: A party general secretary, he will lead a poll campaign in Odisha.  A Thakur leader from UP, Singh (53) started his political career with Bhartiya Janata Yuva Morcha, BJP's youth wing, and has since steadily climbed up the organisational ladder.

Mangal Pandey: A former Bihar BJP chief, he has also looked after party affairs in Himachal Pradesh in past. Now a minister in Bihar government, Pandey (53) has the responsibility of steering campaign in Jharkhand.

Tirath Singh Rawat: A former Uttarakhand BJP chief, Rawat would lead task in Himachal Pradesh. His job will be to ensure a repeat of 2014 feat when the party won all 4 seats.

Nalin Kohli: A lawyer and savvy spokesperson of the party, Kohli is in-charge of Nagaland and Manipur. BJP is in power in Manipur and its ally is at the helm in Nagaland.

Nitin Nabin: An MLA from Bihar, he has been given charge of Sikkim. He is only 38 and has also been associated with BJYM.

Prakash Javadekar, who has been the party's in charge in Karnataka, Tamil Nadu and Andhra Pradesh, likes to take everyone on board.

Due to this quality, he has been given the responsibility of Rajasthan, where BJP under Vasundhara Raje has been at loggerheads with its national leadership over various issues. He has to act as a bridge between both sides.

Javadekar enjoys trust of Modi and Shah. He also has the backing of BJP's ideological mentor Sangh.

Sudhanshu Trivedi has also been again given the responsibility of Rajasthan for 2019 polls.

Trivedi, who has a doctorate in mechanical engineering, rose to prominence during his tenure as political advisor to then BJP chief Rajnath Singh. He is known for his political analysis and deep understanding of caste equations.

Captain Abhimanyu, a minister in BJP government in Haryana, has been given the responsibility of Punjab and Chandigarh. An Amit Shah loyalist, he was in his team for UP during 2014 LS polls.

The Jaat leader handed caste-dominated western UP at that time. Hailing from Haryana, he twice has been in-charge of Punjab in 2012 and 2017.
BJP's Chhattisgarh in charge Anil Jain is a practitioner surgeon at Apollo Hospital, New Delhi.

Jain maintains a low profile and is essentially a backroom boy. He takes care of Shah's schedule and political programmes. BJP lost Chhattisgarh last month with him as in charge.

O P Mathur, vice-president of the party, will lead the campaign in Gujarat after 16 years. He was state-in-charge in 2002 assembly elections.

BJP's Dalit face and Union minister Thawarchand Gehlot has again been given charge of Uttrakhand. He's also a member of BJP's parliamentary board.

The architect of party's victory in Tripura, Sunil Deodhar has been given a new challenge of making the party a force in Andhra Pradesh.

He is known for his organisation skills especially in strengthening the party on the ground and expanding its network of cadres. He will be assisted by V Muralidharan, party's ex-Kerala unit chief.

The responsibility of Telangana has been given to Aravind Limbavali, sitting MLA from Karnataka and ex-minister.