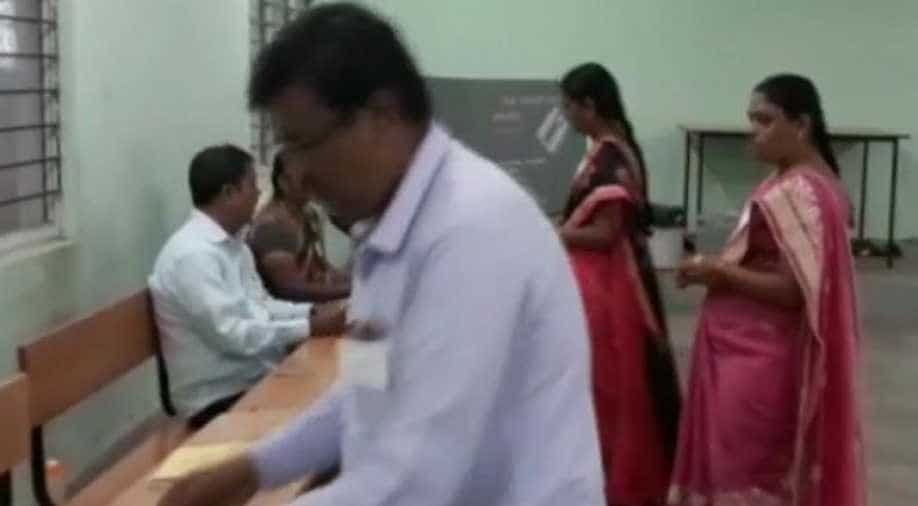 The by-elections are seen as a prestigious popularity test for the ruling Congress-JDS coalition, as the outcome is expected to have a bearing on the state's political scene.

An estimated 67 per cent voter turnout was recorded in three Lok Sabha and two assembly constituencies in Karnataka that went to the by-polls Saturday.

The by-elections are seen as a prestigious popularity test for the ruling Congress-JDS coalition, as the outcome is expected to have a bearing on the state's political scene.

The Lok Sabha constituencies of Shivamogga, Ballari and Mandya recorded 61.05, 63.85 and 53.93 per cent voting respectively.

The initial hours of polling saw a poor turnout, but gathered pace as voting progressed through the day, electoral officials said.

Barring reports about delay in voting due to some technical issues at a couple of places, polling in all the five constituencies was peaceful, they said.

Police had made elaborate security arrangements for the smooth conduct of polls, in which a total of 54,54,275 voterswere eligible to cast their franchise in about 6,450 polling stations.

A total of 31 candidates were in the fray from all five constituencies, though the contest is mainly between the Congress-JDS combine and the BJP.
Counting of votes will be on November 6.

The by-polls were seen as significant as the coalition partners contested together, terming it as a "prelude" to the May 2019 general elections and called for a similar "grand secular alliance" against the BJP at the national level.

JDS supremo and former Prime Minister H D Deve Gowda and former Chief Minister Siddaramaiah had displayed a rare bonhomie during the polls as they buried their past bitter differences to send signals of unity.

The BJP, which has been questioning the longevity of the coalition government, has predicted its fall once the by-pollresults are out.

The announcement of the by-polls for the Lok Sabhaseats came as a surprise to all three major politicalparties in the state -- Congress, BJP and JD(S) - whoquestioned the need for it when the generalelections are due early next year.

The Congress and JDS, who came together in a post-poll alliance after the assembly elections in May this year threw up a hung House, decided to face the polls unitedlyagainst the BJP, which they perceive as their common enemy.

While Congress fielded its candidates in Jamkhandi and Ballari, JD(S) contested in Shivamogga, Ramanagara and Mandya under an electoral understanding.

The outcome of the by-polls is expected to have a bearing on the equations between Congress and JDS for the 2019polls and also be a factor in determining the respective bargaining power of the two parties.

Among prominent candidates in the fray is Chief Minister H D Kumaraswamy's wife Anita Kumaraswamy, who is expected to have a smooth sail, facing a virtual no-contest in Ramanagara after BJP nominee L Chandrashekhar withdrew from the contest and rejoined Congress, giving a jolt to the saffron party days before the polls.

The BJP had lodged a complaint with the Election Commission about the development in Ramanagara and requested it to "annul" the elections immediately.

In the Vokkaliga bastion of Mandya, JD(S)'s Shivarame Gowda is pitted against a fresh face in Dr Siddaramaiah, a retired Commercial Tax officer from the BJP.

During campaigning, open expression of displeasure by Congress workers came to the fore in Ramanagara and Mandya constituencies that come under old Mysuru region, over the party's decision to support the JDS candidates.

It will be interesting to see to what extent JD(S) candidates have been able to cash in on Congress' votes in both these constituencies.

Congress and JD(S) had fought bitterly against each other in the assembly polls, especially in old Mysururegion, but joined hands to form the government as the results threw up a hung verdict.

The by-elections were necessitated afterYeddyurappa (Shivamogga) and Sriramalu (Ballari), and C SPuttaraju of JD(S) (Mandya) resigned as MPs on their election to the assembly in May this year.

Bypolls to Jamkhandi assembly seat was caused by the death of Congress MLA Siddu Nyamagouda, while Ramanagara fell vacant after Kumaraswamy gave it up, preferringChennapatna, the other constituency from where he had won.