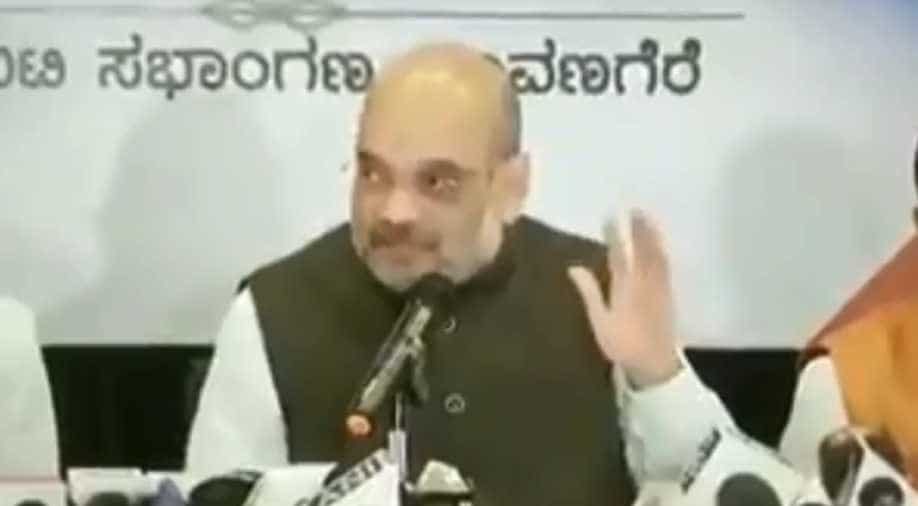 Amit Shah was addressing a rally in Karnataka's Davanagere on March 27. Photograph:( Twitter )

Amit Shah made a faux pas while addressing a rally in Karnataka ahead of the assembly elections. He called the government led by BJP leader and former Karnataka chief minister BS Yeddyurappa the "most corrupt government", inviting sarcastic comments from Congress supporters.

"Recently a retired Supreme Court judge said if there was ever a competition of the most corrupt government then the Yeddyurappa government is number one," Amit Shah said at a meeting in Karnataka's Davanagere. He was making a slew of allegations against the Congress government led by chief minister Siddaramaiah.

The Congress was quick to respond with party leaders including Rahul Gandhi and Siddaramaiah sharing the video of Amit Shah on Twitter.

Now that the BJP IT cell has announced Karnataka elections, time for a sneak preview of our top secret campaign video!

Gifted to us by the BJP President, our campaign in Karnataka is off to a fabulous start. He says Yeddyurappa ran the most corrupt Govt ever...

Who knew @AmitShah could also speak the truth- we all concur with you Amit ji @BSYBJP is the most corrupt! pic.twitter.com/GFbTF3Mg7H

Yeddyurappa, who was chief minister from 2008, was forced to step down in August 2011 after corruption allegations by Karnataka's Lokayukta Santosh Hegde.

Amit Shah, who is on a two-day visit to Karnataka, accused the Siddaramaiah government in Karnataka of trying to divide Hindus and being the "most corrupt" one in the country.

Questioning the timing of the move, he asked the Siddaramaiah government, "What were you doing for five years?" "In 2013 when your own (UPA) government was in power at the Centre, they had rejected it. Why was Siddaramaiah silent then. This is an attempt to divide the Hindus..," he said.

Shah said it was not a programme towards the welfare of the Veerashaiva and Lingayat community but a "conspiracy" to stop Yeddyurappa, considered a Lingayat strongman, from becoming the chief minister.

"Lingayat community understands it and I'm sure the people of Karnataka will answer it through ballots," he said. The Karnataka Cabinet had recently decided to recommend to the Centre to accord the religious minority tag to Lingayats and Veerashaiva Lingayats, apparently to cut into the vote bank of the BJP, which significantly banks on their support.