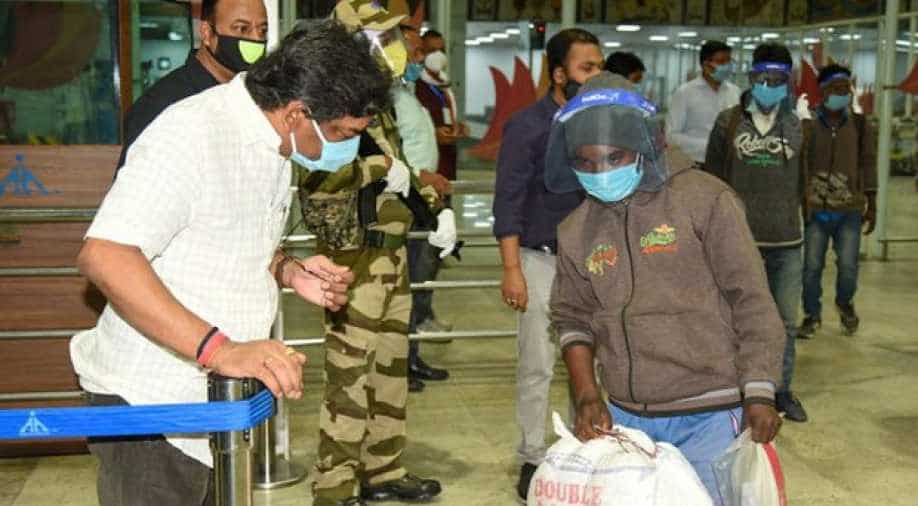 Migrants were flown back home from Andaman and Nicobar a day after 60 stranded workers returned to the state from Leh by a service flight arranged by the state government.

Altogether 180 migrant workers reached Jharkhand from Andaman and Nicobar Islands on Saturday by a state-sponsored charter flight, expressing relief from over two-month-long hardships due to lockdown.

Migrants were flown back home from Andaman and Nicobar a day after 60 stranded workers returned to the state from Leh by a service flight arranged by the state government.

"The expenses of both the flights are borne by the Hemant Soren government", an official statement said here.
The returnees will be sent by buses to their respective districts after health test, officials said.

The migrants said they were given food and shelter by the Andaman administration, NGOs and fellow natives, settled in the island for several decades.

Migrant workers were flown back home in charter flights by the Jharkhand government after the chief minister wrote to Union Home minister Amit Shah on May 21, seeking permission to operate flights to bring back stranded migrant workers from Andaman-Nicobar Islands, Ladakh and the northeast as they could not be ferried by buses or trains.

The returnees from Andaman and Nicobar had requested the Jharkhand government to make arrangement for their return as they were stranded in the Island following the nationwide lockdown.

The chief minister had also agreed that bringing migrants from some places by train or buses was very difficult and air route was necessary to end mental stress of the migrants.

After emerging from Ranchi's Birsa Munda Airport, a labourer said, "Many of us worked in road construction projects and endured much pain due to the lockdown."

He said they were engaged in road construction between South Andaman and North Andaman.

Another labourer said, "We were staying in South Andaman and got food from the administration, NGOs and some people from Jharkhand who have stayed there for a long time."

The migrants went through health screening before they boarded the flight at Port Blair, officials said.

Four years ago, a young tribal woman, who then worked in a shop there, had told visiting journalists from Jharkhand that her forefathers had come to the Island from the state several decades ago and their generations have settled there and also contributed to the development of Andaman.

"Now several generations have settled here (Andaman) and are earning livelihood," she said, tracing her roots to Jharkhand.

According to a Port Blair-based journalist, several natives of this region of the country, which is now known as Jharkhand, were brought to the island in 1930s by the British for infrastructure works and they stayed there since.

"Even a place is named as 'Ranchi-Tegri' and some of the states natives also stay at Bartang," he said.

Nearly 4.5 lakh of around 7 lakh migrant workers spread across the country have reached Jharkhand since May 1 by special trains, buses and now flights.

Till Friday, 313 out of the total 522 confirmed coronavirus cases are migrants. The infection has claimed five lives since the outbreak of the pandemic on March 31.

Jharkhand Water and Sanitation Minister Mithilesh Thakur, who reached the airport to welcome the third batch of migrants returning by flight in as many days, said another flight would take off from Andaman on Sunday.

"This is the third flight which brought migrant workers from places where trains or buses are difficult to bring them. Tomorrow another flight will take off from Andaman & Nicobar Island," Thakur told reporters.

"The government is working to give employment to them in the state," he added.

Besides Thakur, senior MLA and former deputy chief minister Stephen Marandi was also present at the airport and handed food packets to returnees.

They said Jharkhand is the state where the first train and the first flight carrying migrant pravasis reached the state during the lockdown.

A migrant, who hails from Bokaro said, "We were in distress, but now feel relieved after reaching Ranchi."