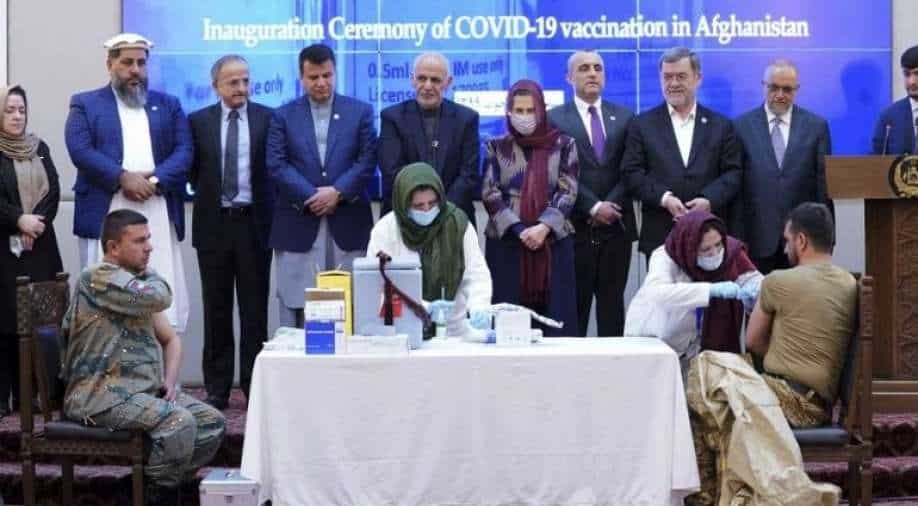 This photograph shows an Afghan security personnel (L) receiving a dose of Covid-19 coronavirus vaccine during a ceremony at the Presidential Palace in Kabul, as Afghanistan launched a Covid-19 vaccination campaign Photograph:( AFP )

India had gifted 500,000 doses of COVISHIELD vaccines earlier this month to the country

Kickstarting the vaccination program in his country with India Made Vaccines, Afghan President Ashraf Ghani on Tuesday lauded the Indian Government and PM Modi for sending vaccines.

The first to be vaccinated were members of the Afghan security forces and health care workers in the inauguration ceremony that was attended by top Afghan officials and the Indian envoy to Afghanistan Rudrendra Tandon.

Ghani said, "India, the world's largest democracy and the largest producer of vaccines, not only provided the house of Parliament of Afghanistan and the dams that are the pride of this country but also partners with us in terms of securing our lives and livelihood."

Elaborating, "the solidarity that India has demonstrated is an indication of both our deep historical relationship and the promise of 2 democracies working in this region together. Let me thank PM Modi, Govt of India for this expectational act of solidarity and generosity."

India had gifted 500,000 doses of COVISHIELD vaccines earlier this month to the country. Last year during the covid pandemic, India sent medicines and sent 75000 MT of wheat to the country as humanitarian aid via Chabahar port to prevent any shortage of food.

New Delhi has so far sent vaccines, in form of gifts and Commerical to more than 20 countries. With the notable exception of Pakistan due to obvious reasons, all of India's neighbors have been gifted covid vaccines by India. In fact, Nepal, Bangladesh, Sri Lanka, Maldives, and Afghanistan began their vaccination program using India-made vaccines. In contrast, Pakistan has stood out by being the only country in South Asia to begin its vaccination using the Chinese vaccine.

Ghani at the event, in what seems to be a remark on Pakistan said, "we need to make sure to overcome the forces of negative nationalism, nationalism should be an act of solidarity and pride in our common humanity and not sponsorship of groups and tendencies that provide for conflicts"

Pakistan has been hosting a number of terror groups, and Kabul has been very vocal about they being the cause of instability in the region.