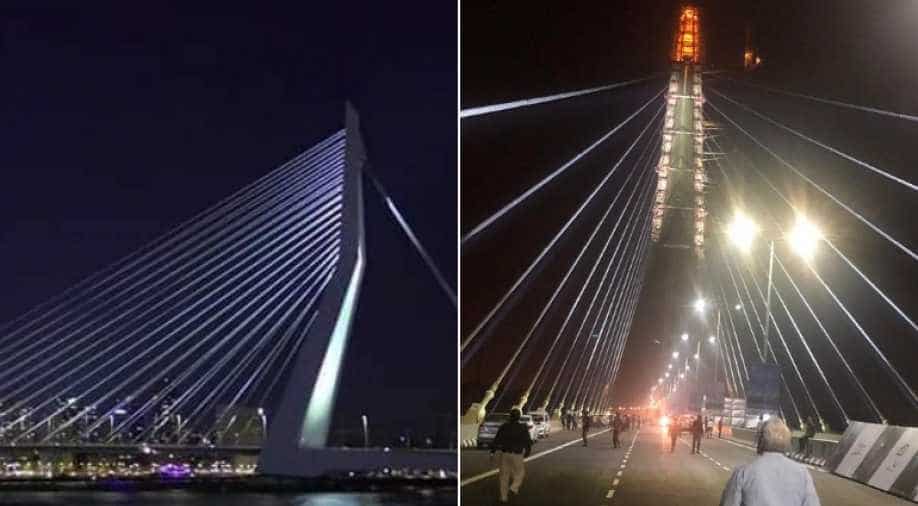 As per twitter users the image posted by AAP was of Erasmus building (left) and not the Signature bridge (right). Photograph:( Twitter )

AAP posted a series of pictures of the bridge on Twitter. It was however quickly pointed out that one of the pictures in the series was of the Erasmus Bridge in Rotterdam, the Netherlands and not of Signature Bridge.

The Aam Aadmi Party may have made blundered while announcing the inauguration of Delhi's much-awaited Signature Bridge.

The party posted a series of pictures on its twitter handle Saturday with the caption: "Delhi! Here is your pride. The Signature Bridge. Ready to welcome you tomorrow for Inauguration Ceremony.. 4PM onwards.. Sunday, 4th Nov. - @msisodia."

Twitter users however were quick to point out that the first image from the series was of the Erasmus Bridge in Rotterdam, the Netherlands and not of Signature Bridge.

Delhi BJP spokesperson Tajinder Pal Singh Bagga told Delhi Chief Minister Arvind Kejriwal that "if you had carried out development, then you wouldn't have had to steal a picture from the Netherlands."

And the jibes continued:

LOL the 1st image is a bridge in Rotterdam pic.twitter.com/8QvILrq6xh

Kejriwal is scheduled to inaugurate the bridge at 4 pm on November 4 and it will be opened to the public on November 5. The bridge has been built over river Yamuna and will reduce the travel time between north and northeast Delhi.