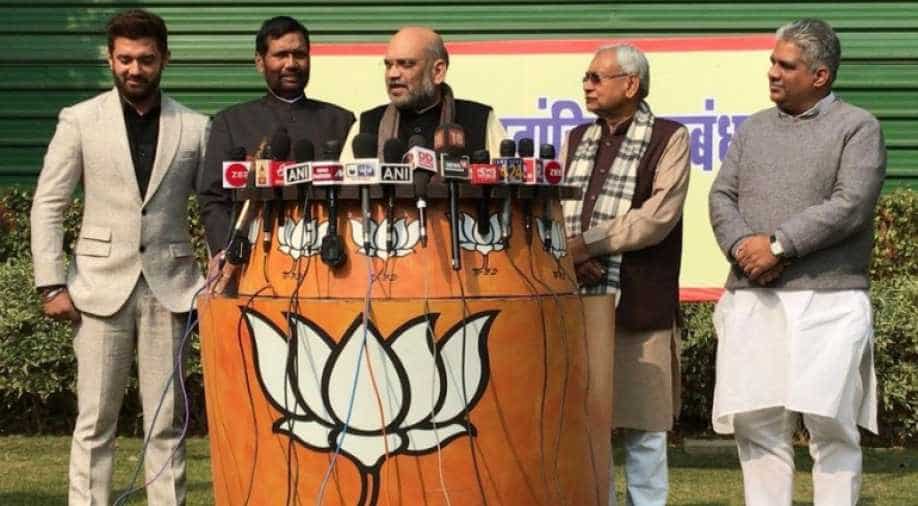 The announcement was made in Delhi by BJP President Amit Shah who also said that there was no difference of any kind within the NDA in Bihar.

BJP president Amit Shah announced on Sunday that his party would contest 17 Lok Sabha seats in Bihar, while the Janata Dal (United) would fight from an equal number of seats.

Talking to media persons, Shah said that the alliance would contest the coming Lok Sabha polls under the leadership of Prime Minister Narendra Modi. He also said that there was no difference of any kind within the NDA in Bihar.

The BJP president further said seat allocation would be decided in the coming days.

Growing discontentment among the NDA allies in Bihar came out in the open when LJP’s Chirag Paswan told the media that the BJP had digressed to ‘non-issues’ like the Ram temple and had demanded urgent steps to return to the ‘real issue’ of development.

Chirag had also expressed unhappiness over the sharing of seats in the state.

Meanwhile, RLSP chief Upendra Kushwaha, after pulling out of the NDA on December 10 over the issue of seat allocation for 2019 Lok Sabha elections, joined the UPA on December 20 to be a part of the grand alliance.