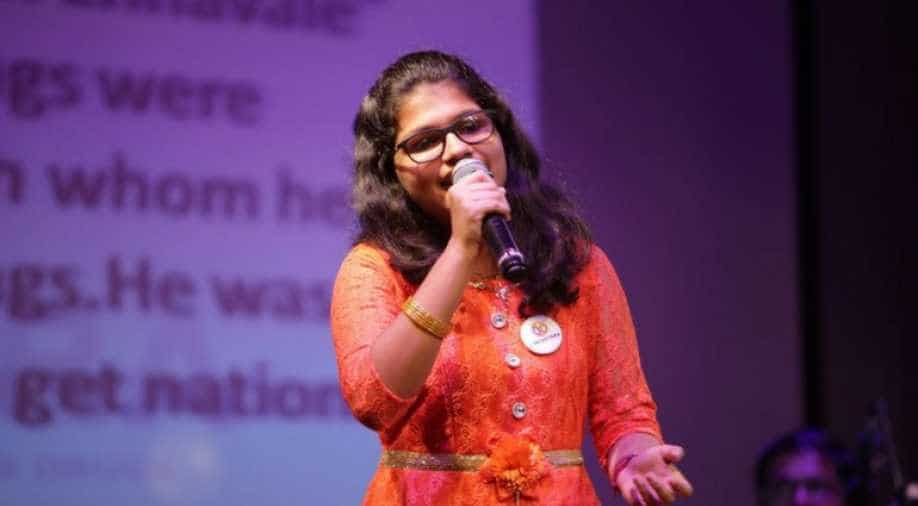 Suchetha Satish, a twelve-year-old, grade 7 student of the Indian High School, enthralled the audience as she sang in different languages Photograph:( Others )

A 12-year-old Indian girl born in Kannur, Kerala, Suchetha Satish, has set a new world record by singing in 102 languages over six hours 20 min in a concert at Dubai.

Suchetha Satish, a grade 7 student of the Indian High School, enthralled the audience as she sang in different languages.

After a formal inauguration ceremony at the Indian Consulate Auditorium in Dubai on 25th of January as part of Republic Day Celebrations. Suchetha started singing at 4.10 pm and sang almost non-stop until 10.30pm.

She had chosen a patriotic song to end the day in true Indian spirit. The audience included general public besides doctors, Indian diplomats, her friends, teachers and well-wishers. Congratulating Suchetha on her achievement, the Consul General of India in Dubai Vipul said, "this is indeed an incredible achievement. You have done the entire Indian community proud and this record is a wonderful gift on the Republic day.”

Suchetha already knew to sing in some Indian languages like Hindi, Malayalam and Tamil. She has also been singing English songs in school competitions. But it was only last year that Suchetha started singing in other foreign languages.

Her first song in a foreign language was in Japanese. French, Hungarian, and German were the most difficult ones for her, she had said.

Suchetha's father Dr TC Satish said that Suchetha showed interest in singing from a very young age. "It all started just a few years ago when one of my Japanese friends came home and sang a Japanese song which felt very attractive to my daughter. She learned and recorded the song and send it back to my Japanese friend the next morning. This song was sung in correct tune and accent and after that my friend posted it on Facebook and was very much appreciated by the Japanese people. That's what started Suchetha's journey and after that she never looked back. She started singing in different languages after watching Youtube and it became a passion. Sometimes she learns a song in less than two hours," he said.

Her father added, "Although she likes Armenian and Slovak songs in particular, she is also fond of songs from Arabic and Turkish too".

After receiving the award from the Consul General of India H.E Shri Vipul, amidst thunderous applause Suchetha dedicated the award to the PM of UAE HH Sheikh Mohammed Bin Rashid Al Maktoum and PM of India Shri Narendra Modi and to Indians all over the world and all the people living in UAE of different nationalities. She also urged the youth to take up music or sport to attain a high rather than tobacco, alcohol and drugs.

Suchetha also visits labour accommodations as part of her campaign in association with Indian Workers Relief Committee (IWRC) and even takes pledges from the labourers to quit these bad habits. Suchetha is the daughter of Dr T.C Satish, dermatologist in Dubai and Sumitha Ayilliath and is the sister of Sushant Satish.

India Book of Records recorded the name of Suchetha Satish in their book and Dr Biswaroop Chaudhary, Editor of India Book of Records, said that this is a matter of pride for our country and especially when such a young talented person takes up the campaign against tobacco, alcohol and drugs, then it will help in freeing our society from drug addiction.