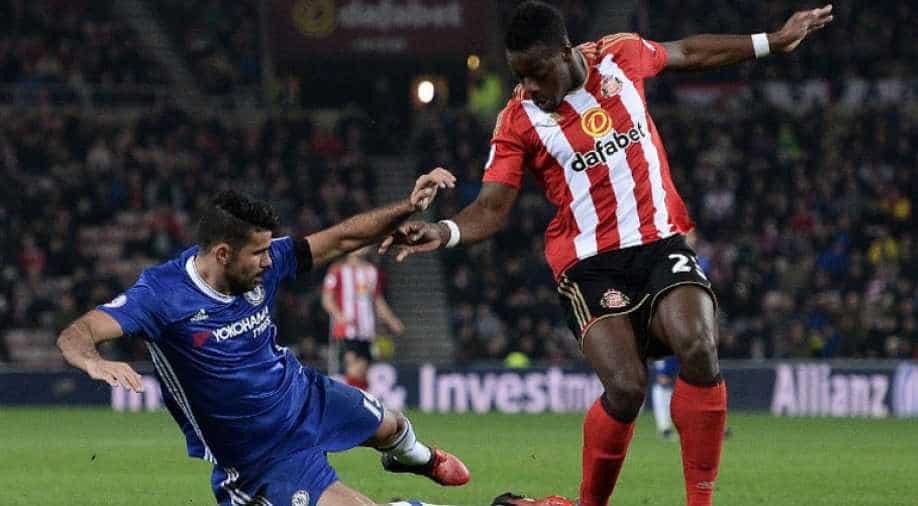 Cesc Fabregas's goal earned Chelsea a 1-0 victory at Sunderland on Wednesday -- their 10th in succession -- as Antonio Conte's side surged six points clear at the Premier League summit.

Fabregas, who came in for Nemanja Matic, curled in from Willian's 40th-minute cut-back to establish Chelsea's longest winning run within the same league campaign since 2005-06.

Chelsea, for whom Eden Hazard missed out due to a knock, have won all 10 league games they gave played since losing 3-0 at Arsenal on September 24, keeping eight clean sheets.

But it took a flying save from goalkeeper Thibaut Courtois to prevent Patrick van Aanholt snatching a point for bottom club Sunderland at the death.

Conte's men are six points clear of Liverpool, who stole above Arsenal into second place courtesy of a 3-0 win at Middlesbrough in which Adam Lallana scored twice.

Having seen his side beaten 4-3 at Bournemouth and then held to a 2-2 draw by West Ham United, Liverpool manager Jurgen Klopp dropped goalkeeper Lorus Karius for Simon Mignolet.

His team went ahead in the 29th minute when Lallana headed in from England team-mate Nathaniel Clyne's right-wing cross.

Lallana teed up Divock Origi to add a second on the hour and eight minutes later the Belgian returned the favour as Lallana claimed his second goal.

Liverpool moved above Arsenal on goal difference, Arsene Wenger's side having lost 2-1 at Everton on Tuesday.

In further bad news for Arsenal, City, Tottenham and United all closed in on them.

Pep Guardiola's City hit back after successive defeats against Chelsea and champions Leicester City by winning 2-0 at home to Watford.

Guardiola, who dropped John Stones and reverted to a back four, saw his side prevail thanks to goals in each half by Pablo Zabaleta and David Silva.

City remain fourth, seven points adrift of Chelsea, but only a point below Liverpool and Arsenal.

Tottenham are three points back in fifth place after Christian Eriksen scored twice in a 3-0 home win over Hull City, with Victor Wanyama also on target.

Having beaten Spurs 1-0 on Sunday, United recorded back-to-back league wins for the first time since August by edging Palace to remain three points below Mauricio Pochettino's men in sixth place.

Jose Mourinho's side went ahead in first-half stoppage time at Selhurst Park when Ibrahimovic chested down Juan Mata's free-kick for Paul Pogba to score from close range.

United were pegged back in the 66th minute when James McArthur beat David de Gea at his near post, but with full-time beckoning Pogba freed Ibrahimovic to dink home his 14th goal of the season.

West Bromwich Albion climbed to the heady heights of seventh place after a hat-trick of headers by Salomon Rondon gave Tony Pulis's men a 3-1 home win over third-bottom Swansea City.

West Ham pulled clear of the relegation zone after Mark Noble tucked away the rebound from his own penalty to secure a 1-0 home win over Burnley.

Stoke City survived the 22nd-minute dismissal of Marko Arnautovic for a studs-up lunge at Sofiane Boufal to secure a 0-0 draw at home to Southampton.