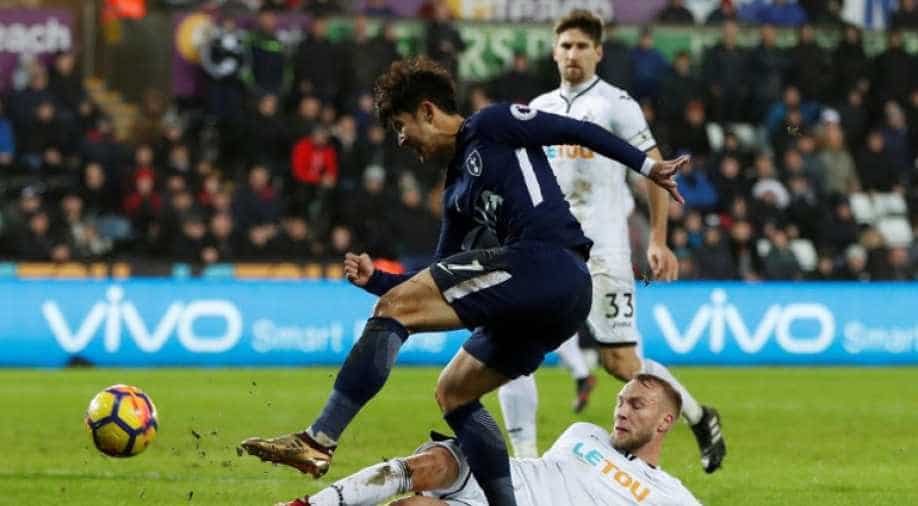 Tottenham Hotspur could afford to start Harry Kane on the bench and watch his replacement Fernando Llorente spearhead their hard-earned 2-0 Premier League win at bottom club Swansea City on Tuesday.

Former Swansea man Llorente, enjoying a rare start as Kane recovered from a heavy cold, headed Spurs in front after 12 minutes, although he was clearly offside when meeting Christian Eriksen's free kick.

In incessant driving rain at the Liberty Stadium, Spurs looked largely in control until after the break when Jordan Ayew went close and Jan Vertonghen inadvertently deflected a Swansea attack against his own post.

Yet Kane, brought on for the final 20 minutes, calmed nerves as he superbly set up an 89th-minute goal for Dele Alli that sealed the victory which lifted Spurs to fifth in the table, above their local rivals Arsenal.

A dramatic late win at Watford had given Swansea's new manager Carlos Carvalhal the ideal launch pad for a revival but the Portuguese's first home match in charge illustrated the magnitude of the task facing him.

"You need luck to score and win, yes, but after 90 minutes I think it's clear we were better and deserved the points," Spurs manager Mauricio Pochettino told the BBC.

Even the absence of Kane, not risked from the start with Spurs due to play 48 hours later against West Ham United, did not stop the early one-way traffic in the pouring rain which left surface water on the pitch.

It did, however, mean the Spurs' marksman, who was brought on midway through the second half, missed out on the chance of a third successive league hat-trick, a feat not achieved in English football for 72 years.

Instead, it was Spanish international Llorente who ghosted ahead of his marker and latched on to Eriksen's superb whipped free kick from the left flank to head home past Lukasz Fabianski.

The decision to award the goal clearly exasperated Carvalhal, who was right in thinking Llorente was offside but there could be no argument about the quality of the assist from Eriksen.

It meant the Dane has now been involved in either scoring or setting up 11 goals in eight league matches against Swansea.

Yet after dominating the first half against the side with the worst defensive record in the league, Spurs made heavy weather of the win, a resurgent Swansea coming closest when Mike van der Hoorn's header deflected off Vertonghen's back and struck the woodwork.

Spurs, though, reasserted their superiority when Kane came on, the goalscorer par excellence turning provider as his marvellous through ball on the counter-attack found Alli, who bundled the ball home at the second attempt.