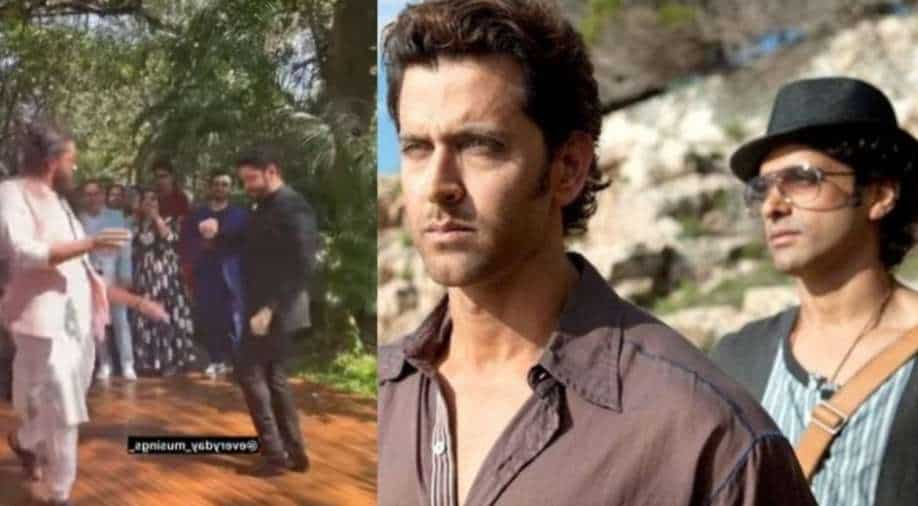 Fans on Twitter have declared that it is a bad idea to invite Hrithik Roshan to one's wedding as he easily hogs all the limelight.

Filmmaker- actor Farhan Akhtar married long-time girlfriend Shibani Dandekar in an intimate ceremony in Khandala on Saturday. The wedding was strictly a private affair with only close family and friends in attendance.

Farhan's friend, Bollywood superstar Hrithik Roshan also attended the wedding along with his parents Rakesh and Pinky Roshan. A video from the post-wedding celebration is doing the rounds of the internet which has Farhan and Hrithik dancing to the hit song 'Senorita' from their film 'Zindagi Milegi Na Dobara'. Directed by Zoya Akhtar, the road trip buddy film featured the two stars along with Abhay Deol.

The video has the two dancing to the song. While the groom is dressed in a black suit, Hrithik is dressed in a white kurta pyjama with a pink jacket. At one point, Farhan is seen performing the hook step while his buddy, Hrithik can be seen doing some other step.

The video has gone viral on social media and fans on Twitter have declared that it is a bad idea to invite Hrithik Roshan to one's wedding as he will easily hog all the limelight.

Here's what Twitter had to say to the viral video.

Have always wondered why no one has made a dedicated dance musical film with @iHrithik a la Grease . Such joy to watch him. https://t.co/yNJRsR5sLJ

Even when he forgets the steps, Hrithik Roshan can’t miss a single beat. https://t.co/IFs6fAUHB0

THAT'S IT!!! Hritik is not invited to my wedding. I don't want me and boys to be upstaged cuz we have bones in our bodies. https://t.co/5Qiy07wGiI

When u forget dance steps but u have choreographer frnd to teach u😂 https://t.co/aHmQkcfMjX

hrithik stressing about forgetting two steps is a lot like his character arjun in znmd https://t.co/7ZMveJWfMi

i have already watched this an unhealthy number of times https://t.co/w5gefZYoVR

Farhan Akhtar and Shiabni Dandekar married at the actor's Khandala farmhouse on February 19.

It's a baby girl! Chris Pratt, Katherine Schwarzenegger welcome their second child together