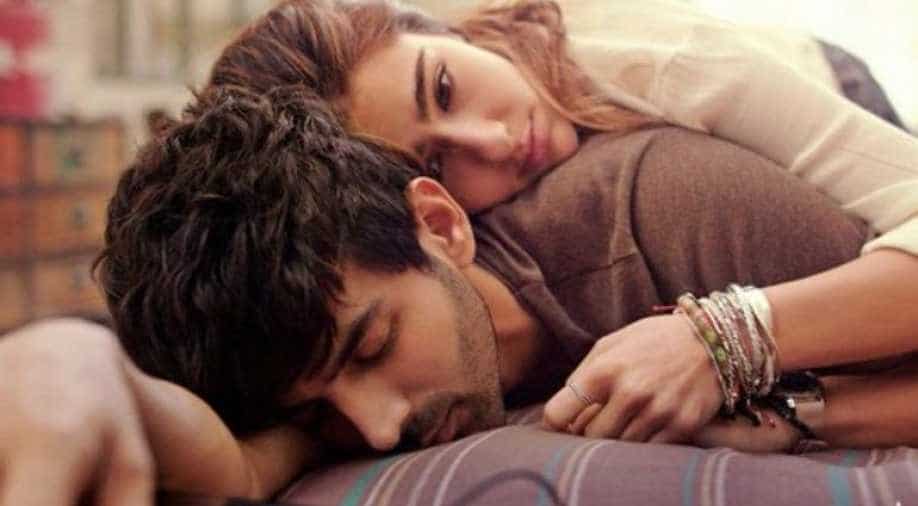 In 2009, when Imtiaz Ali gave us Love Aaj Kal featuring Saif Ali Khan, Deepika Padukone, Giselle Monteiro and Rishi Kapoor there was a certain amount of freshness to a film that told two distinct stories of two different generations. Their destiny may have been the same, as the emotion of love is universal and timeless but the journey was different. There were two parallel narratives and with the effervescent charm of the cast, and some memorable music Love Aaj Kal in 2009 managed to strike a chord with the audience.

I wish I could say the same about the 2.0 version of Love Aaj Kal that hits theatres today.

Imtiaz Ali's newest release featuring current heartthrob Kartik Aaryan, Sara Ali Khan and Randeep Hooda struggles from the word go. The film opens with Zoe (Khan) and Leena (newcomer Aarushi Sharma) charging at Veer and Raghu for stalking them for weeks. When the 90s lad offers an apology and assures Leena that he won't follow her anymore, she retorts 'have I asked you to not follow me?' giving completely mixed signals to the boy and reiterating Bollywood's notion of 'naa mein haan' fixation and normalizing stalking.

Anyway, moving on(which Imtiaz Ali hasn't from his 2009 hit) the film then explores the story of very complex characters in two different decades. The older couple's story unfolds in Udaipur and Delhi where despite fighting the odds and somewhat eloping - the boy dwindles. In the present day, Veer is wired differently and wants more than sex from Zoe. The girl here though is focussed on her career and only wants sex and no commitment. She keeps insisting that she can't balance between love and career and hence wants to get rid of emotional baggage- even though the boy has not ever asked her to compromise or choose between him and her profession.

At interval,  the film seems like a story of warped, self-destructive individuals - classic Imtiaz Ali style. But then the second half opens with stand up comic rapping about how society limits us to have monogamous relationships and its always about lust and love. Quite honestly at this point of time, I was confused as to what the ultimate message the film is trying to give out. Does it try to question love and loyalty or does it question the mess love creates in people's lives? In this film, lines become blurred as Zoe, a self-made ambitious girl who questions societal norms and the idea of commitment resorts to sappy stories of love narrated by the older Raghu (Randeep Hooda) in times when she is anxious or disgruntled with life.

Imtiaz Ali has often been accused of showing women as the secondary characters whose life revolves around a man-child and how to nurture him. And so in 'Love Aaj Kal' he makes the woman the most screwed character- completely losing it, hyperventilating at the drop of a heartbeat for no particular reason.

Both Sara Ali Khan and Kartik Aaryan overdo their parts. She goes extra with her extrovert, sexy, no care for the world avatar while he goes a tad loony in his restraint avatar and together the two make for a very complicated couple who you would not want to associate yourself in real life.

I thought that the '90s track featuring Aryan and Aarushi Sharma was more convincing and more charming than the present-day one. Perhaps because Ali himself belongs to that generation and Raghu could easily be Ali himself and hence that story seems to be better stretched out and newcomer Aarushi Sharma shows spark in her limited screen time. The portions where the two dance it out at a school social is one of the most endearing scenes in the film- and one that stays with you for a long time. Pritam's music- much like the first part- is hummable especially the song 'Shayad'.

Ali, though fails to understand the Millenials while telling the story of Veer and Zoe and make them appear confused, unsure and with a brain that's as light as a feather. Unfortunately, the present-day love story featuring Khan and Aryan gets more screen time and hence making the film a tedious watch.

In the newer version of 'Love Aaj Kal' one could have hoped that the director who is also the writer of the film, would tell a new story-give a new perspective on love. But what we get is more (and unnecessary)  complicated version of the same story that we had seen in 2009. 11 years down the line, the audience has grown and has seen far greater stories on screen and this one seems too jaded. Also, it doesn't help that the current cast doesn't have half the charm of Saif Ali Khan and Deepika Padukone.

The film, once again, reiterates the fact that Imtiaz Ali has just been churning out the same story for a long time, where the template remains the same - of flawed characters finding love and finding themselves in the process. The template has been overused and maybe its time for the director to step back and take note of things and re-assess his style of storytelling.

An entire generation has grown up on Imtiaz Ali's style of romance ('Jab We Met', 'Socha Na Tha', 'Love Aaj Kal') and he has let down that generation and the Millenials with this film. Or maybe we all need to stop putting the filmmaker on a pedestal and making his films the ideals on how modern romances are supposed to be. Much like Imtiaz Ali, we too need to reassess things a bit.