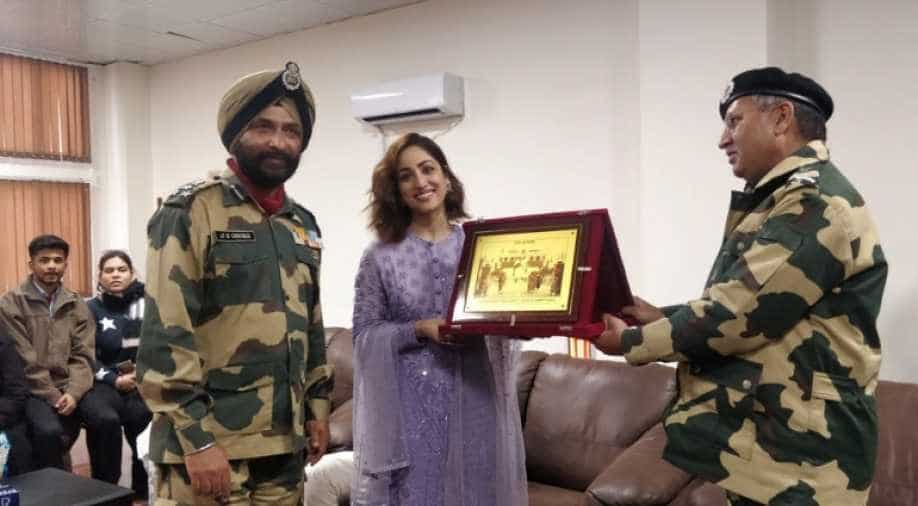 Yami Gautam was recently felicitated by BSF during her visit to Amritsar. Photograph:( WION Web Team )

Yami Gautam is riding high on the success 'Uri: The Surgical Strike' which has grossed over Rs 150 crores agt the box office and has become the first hit of 2019.

Actress Yami Gautam is riding high on the success 'Uri: The Surgical Strike' which has grossed over Rs 150 crores agt the box office and has become the first hit of 2019. Along with her co-actor Vicky Kaushal, Yami too is being applauded for her performance as an intelligence officer in the film.

Recently, Yami visited Amritsar to promote the film. The BSF regiment in Amritsar during her visit, gave her a token of appreciation and felicitated for remarkable performance and being a part of the film 'URI'. Yami was truly touched with the kind gesture of the jawans as she attended the event and received the token of appreciation by senior officers from BSF.

“BSF is the first line of defence of our country and it gives me immense pride to have met them in person and be in their company. It was kind of them to have given me and the team this kind of love. Wherever we have traveled with the film, especially meeting the men who serve our country, people have showered us with a great deal of appreciation and love. They have been unanimously happy with the film."

Meanwhile, Yami along with Vicky Kaushal was seen attending the Republic Day parade at the Wagah border recently.

The JOSH was unbeatable today for the Republic day celebrations at the Wagah Border, Attari. Thank you @bsf_india and everyone for such a surreal experience !! 💫😍 @vickykaushal09 @adityadharfilms @rsvpmovies

The film, which released on 11th Januray, has been consistently doing well and still running to packed houses.