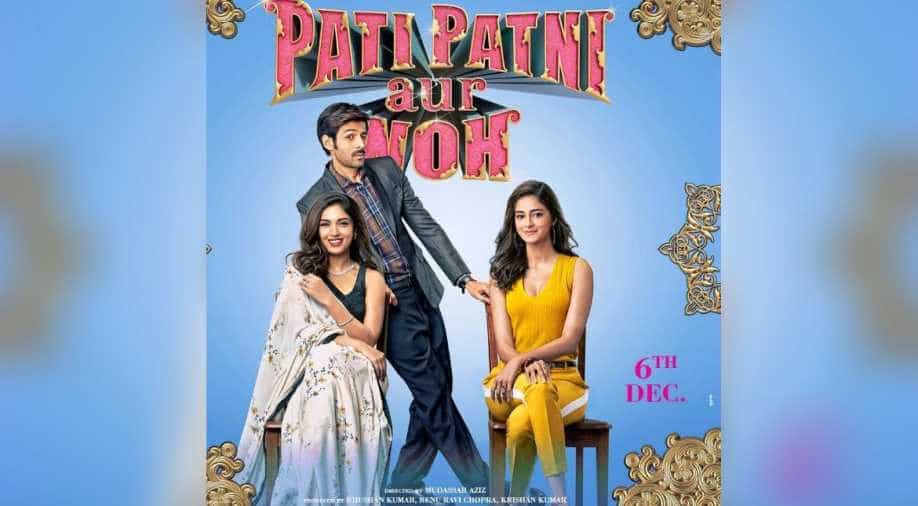 Kartik is shown torn between Ananya and Bhumi’s characters -- the other and the wife respectively.

The trailer of the much awaited film ‘Pati, Patni Aur Woh’ is finally out and it looks like the film sticks too much to the title of the film.

Kartik Aaryan and Bhumi Pednekar play a newly-married couple who have wed out of family’s wishes. The trailer establishes Bhumi as a wife who loves sex and talking about it (atleast from the trailer).

While Ananya Panday’s character as expected is more colourful and urbane contrary to the small town she has come to live in. While Bhumi is all about sexy sarees, Ananya ups oomph in skirts and dresses.

Kartik is shown torn between Ananya and Bhumi’s characters -- the other and the wife respectively. Kartik makes Ananya believe that his wife does not pay attention to him and is having an affair while he is doing all those things and not Bhumi.

From the trailer, the film brings the 90’s hit plot back of the man seeking love and affection outside marriage.

Aparshakti Khurana plays Kartik’s loyal friend in the film who doesn't miss a beat with his comic timing.

You should also see a new poster from the film that is captioned: “ChintuTyagi ke dil ki chaabi kiske paas hai: Patni ya Woh.” See other posters here.