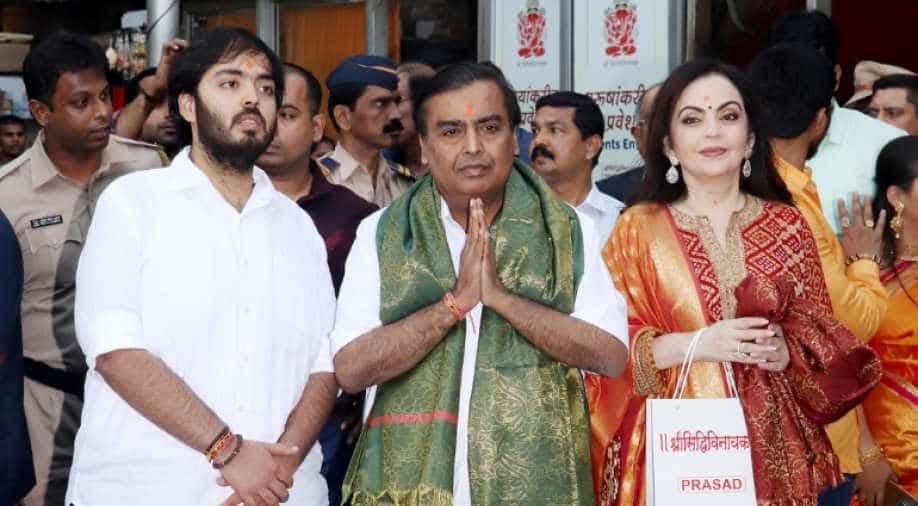 Akash proposed to Shloka in 2018 at a private ceremony in Goa that was attended by both the families.

The country is yet to get over Isha Ambani and Anand Piramal's grand wedding and Mukesh and Neeta Ambani are already preparing for the next big wedding in the family.

On Monday, Mukesh Ambani and his wife Neeta and son Anant visited Mumbai`s Siddhivinayak temple to offer prayers and give the first wedding invitation card of their elder son Akash Ambani who is tying the knot with Shloka Mehta.

Shloka Mehta is the youngest of three children of diamantaire Russell Mehta and his wife Mona Mehta.

Mukesh and his younger son Anant were spotted outside the temple, wearing half-sleeved white shirt and black pants. They were accompanied by Neeta, dressed in a red and golden kurta.

Akash proposed to Shloka in 2018 at a private ceremony in Goa that was attended by both the families.

The two even performed together at his sister Isha Ambani’s sangeet ceremony last year.

According to the reports, Akash and Shloka’s wedding is going to take place on 9th March.

The Ambanis ended 2018 on a high note with the wedding of their daughter Isha to Anand Piramal, son of Ajay and Swati Piramal. The new year will now see the wedding of their eldest son to his childhood sweetheart. Also see: Akash Ambani- Shloka Mehta's engagement bash has Priyanka Chopra, Ranbir Kapoor, SRK in attendance