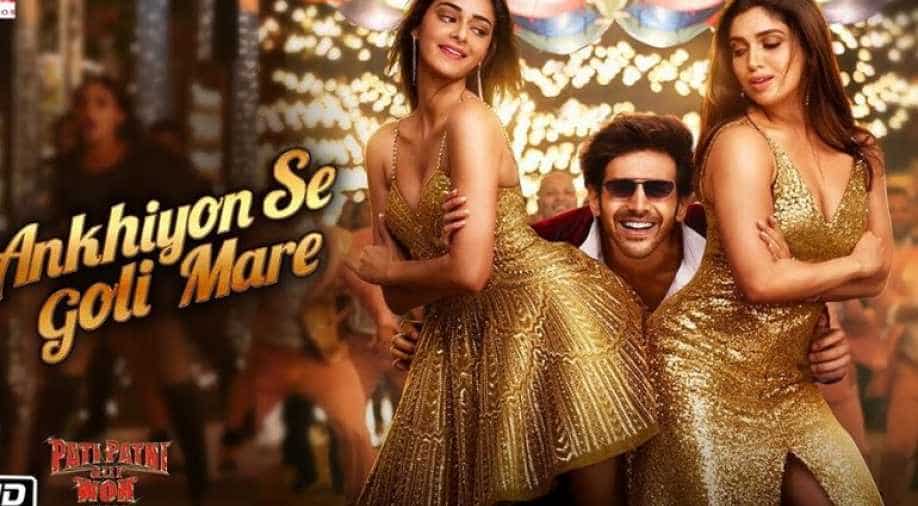 Titled as 'Ankhiyon Se Goli Mare,' the song is a rejigged version of Govinda and Raveena Tandon's 1998 super-hit track.

Titled as 'Ankhiyon Se Goli Mare,' the song is a rejigged version of Govinda and Raveena Tandon's 1998 super-hit track that made its way into the party playlist of every 90's kid.

While remixing the popular track, composer Tanishk Bagchi added some groovy beats, which is sung by Mika Singh and Tulsi Kumar. While the song makes your feet tap, the video will make you learn some updated hook step. Without a doubt, the trio looks absolutely stunning in edgy outfits.

The film's trailer came out earlier this month and featured Chintu Tyagi, played by Kartik, narrating a tale of how his father made him study, work and then get married, all on the pretext of achieving a peaceful life at every stage.

It further showed how Chintu juggles to maintain a balance between his married life and an extra-marital affair. In all, the trailer is a sure sign that the movie will be a full-time entertainer. Watch the movie trailer here

It is a remake of the 1978 film with the same name and also features Aparshakti Khurrana in a supporting role. The movie is directed by Mudassar Aziz and produced by Bhushan Kumar, Renu Ravi Chopra, and Krishan Kumar. 'Pati Patni Aur Woh' is slated to release on December 6.