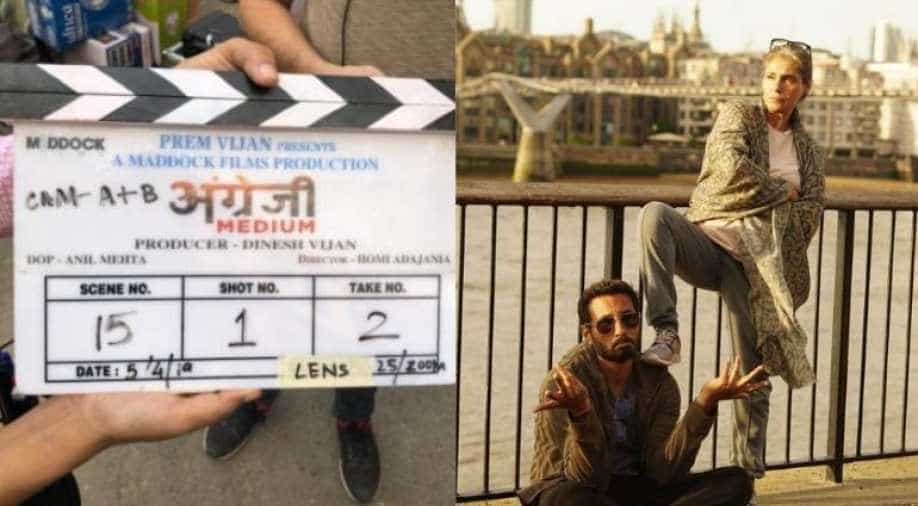 Homi Adajania, who is helming Irrfan Khan starrer 'Angrezi Medium', has been sharing stills from the film to keep the audience on their toes.

Homi Adajania, who is helming Irrfan Khan starrer 'Angrezi Medium', has been sharing stills from the film to keep the audience on their toes.

He is probably the most active user on Instagram and thanks to him, we are getting to know a lot more about the film and its cast.

Adding to the excitement, Homi shared yet another picture which shows the bossy side of Dimple Kapadia. The picture, shared on Instagram by the filmmaker, is sure to leave you in splits.

In the still, Dimple can be seen placing one of her legs on Homi's shoulders and standing next to him with a bossy attitude. On the other hand, Homi is seen gesturing with his hands in a funny and confused manner.

The director also added a hilarious caption along with the picture which read, "When the muse decides to abuse." He accompanied his caption with hashtags like #dimplekapadia #angrezimedium #mrskohli #shootlife #londonsched and tagged Twinkle Khanna, asking for help.

The director has also been successfully turning his daily on-set conversations with Irrfan into hilarious memes which he keeps sharing on the photo-sharing application.

The team first started shooting for the film in April in Udaipur and are currently filming in London. Homi has earlier helmed films like 'Being Cyrus', 'Cocktail', 'Finding Fanny'.

The film will mark Irrfan's comeback on the big screen, post the brief break that he took, as he was seeking treatment for a neuroendocrine tumour in London.

The film, which also stars Kareena Kapoor Khan, Radhika Madan, went on floors in Udaipur on April 5. Kareena will play a cop in the film while Radhika will play Irrfan`s daughter who, reportedly, wishes to pursue higher studies in the UK.

'Angrezi Medium' is the sequel to the 2017 hit film 'Hindi Medium', which starred Irrfan and Saba Qamar in the lead roles.

The film is being produced by Dinesh Vijan and apart from Udaipur, will also be shot in London.

Irrfan was last seen in 'Karwaan' alongside Mithila Parker and Dulquer Salmaan.

On the other hand, Kareena was last seen in 'Veere Di Wedding'. Apart from 'Angrezi Medium', she will also star in 'Good News' alongside Akshay Kumar, Diljit Dosanjh and Kiara Advani.