Grammys 2019: Pantsuits, sex appeal and lots of skin on the red carpet 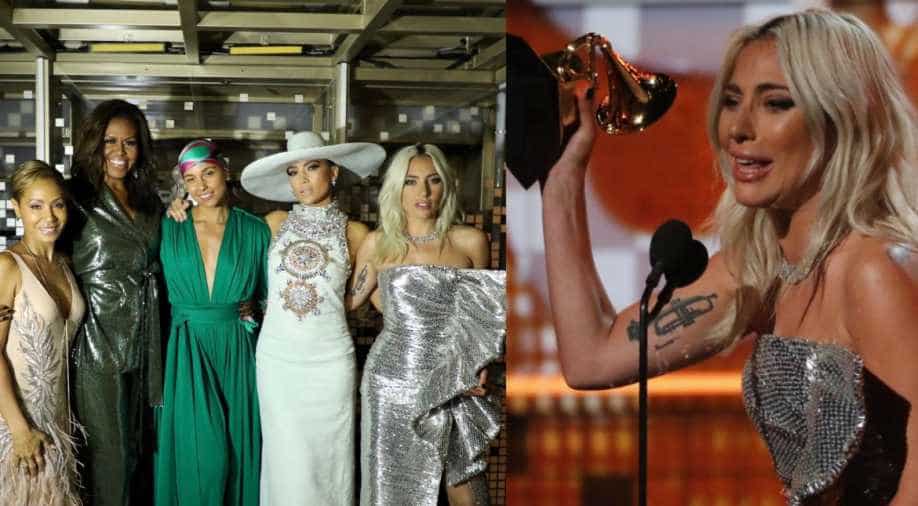 In 2018, the Grammys red carpet was full of stars wearing white roses in support of gender equality. Click here for the full list of winners.

This year, with women better represented among the nominees on music's biggest night, music's A-list went back to red carpet basics Sunday. That means sex appeal, lots of trouser suits and rock-star glamour.

And for others... it means pro-Trump attire.

Here are some takeaways from the red carpet on Grammys night at the Staples Center in Los Angeles:

Host (and 15-time Grammy winner) Alicia Keys has promised the "sickest" gala ever, with lots of red-hot performances. But there was a lot of red-hot fashion as well.

The 'Girl on Fire' singer brought the heat in a plunging V-neck red Armani gown, with button detailing down the front.

And Bebe Rexha, who went on a social media tirade over designers who refused to dress her because she was "too big" -- fluttered onto the carpet in a cloud of red tulle.

Rap's woman of the moment, Cardi B, made quite an entrance in a dramatic vintage Thierry Mugler couture gown that erupted from a dark mermaid skirt in a fan of pale pink pleats behind her.

Elbow-length gloves and a cone of pearls atop her head finished the look -- Cardi B brought her fashion A-game.

Sultry Cuban-American singer Camila Cabello, who opened the ceremony with her mega-hit 'Havana,' went for something simpler -- she glittered in a sparkly high-neck, long-sleeve, but backless, pink Armani gown.

Country star Kacey Musgraves, already twice a winner on Sunday in the early portion of the awards ceremony, opted for an ultra-feminine strapless pale pink gown with a fan bodice and a darker sash.

Men can rock pink as well, as nominated rapper Post Malone showed -- in a full pink suit with glittering stars all over it.

The women of music came ready to play -- and for top female nominee Brandi Carlile, pop star Miley Cyrus, Meghan Trainor and others, that means trousers.

Carlile rocked a smart tuxedo-style suit with a long coat while Trainor opted for a white jumpsuit with a deep neckline.

Former first lady Michelle Obama earned a screaming ovation when she made a surprise appearance at the start of the show in a gunmetal pantsuit with a kimono-like jacket.

You don't see too many hats on other showbiz red carpets during awards season at the start of each year, but the Grammys style parade is in a league of its own.

Pop futurist Janelle Monae led the charge with her jaunty angled golden flying saucer hat, while Lopez made a statement in a wide-brimmed hat that for many resembled one worn by First Lady Melania Trump last year.

On the men's side, funk legend George Clinton -- who is receiving a lifetime achievement award -- wore a futuristic helmet that made it somewhat hard for him to see.

Showbiz is generally unkind to Donald Trump, but a few with Grammys invitations have used the red carpet to show their love for the Republican president -- and boost their social media profiles.

Singer Joy Villa wore a red, white and blue Make America Great Again gown in 2017. This year, she went for a statement about Trump's plans to build a wall on the border with Mexico: "BUILD THE WALL" was scrawled in red on her white gown, with a brick pattern... like a wall.

Ricky Rebel looked like he had repurposed Villa's gown from two years ago, arriving in a red, white and blue Trump-MAGA jacket.