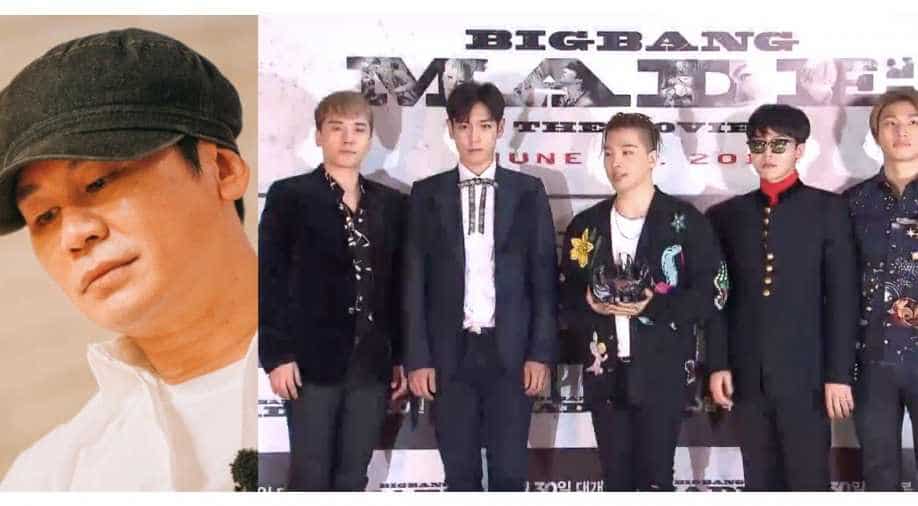 Members of the K-Pop band Big Bang and the founder. Photograph:( Twitter )

In March, a member of YG's boyband Big Bang quit showbiz over sex bribery accusations, prompting police investigations and the resignation of four K-pop stars including him.

Yang Hyun-suk, the founder of South Korea's YG Entertainment which manages top K-pop performers, stepped down on Friday from his duties as chief producer, in the aftermath of drug and sex scandals involving his artists. In pictures, see how controversy, lies and videotape have rocked the K-pop world with scandals.

In March, a member of YG's boyband Big Bang quit showbiz over sex bribery accusations, prompting police investigations and the resignation of four K-pop stars including him.

Allegations subsequently surfaced of a network of pop stars, businessmen and cops having colluded and enabled tax evasion, bribery and prostitution, exposing the dark side of the glitzy industry.

"I have waited out in patience this situation in which shameless and humiliating words are being thoughtlessly spread as if it is the truth," Yang, a former legendary K-pop star, said in a statement.

"But I don’t think I can hold it in any longer."

Yang said he was stepping down to avoid further damage to the firm's artists over the accusations. These involved prostitution mediation, tax evasion and cover-up of a drug scandal, all of which he has denied.

YG's top shareholder, Yang, founded the K-pop management firm in 1996. His brother Yang Min-suk, the agency's chief executive, also stepped down, according to a regulatory filing.

On Wednesday, the leader of another one of YG's boy bands, iKON, also exited show business over media reports that he was attempting to buy illegal drugs. He publicly apologised for his actions and quit the band.

YG Entertainment is one of the top K-Pop record labels behind groups BlackPink and Big Bang, but its shares have slumped for months, hit by the scandals.

Shares of YG Entertainment closed down 5.6 per cent on Friday, falling for a third consecutive session, while its affiliate, YG Plus, lost nearly 6 per cent.