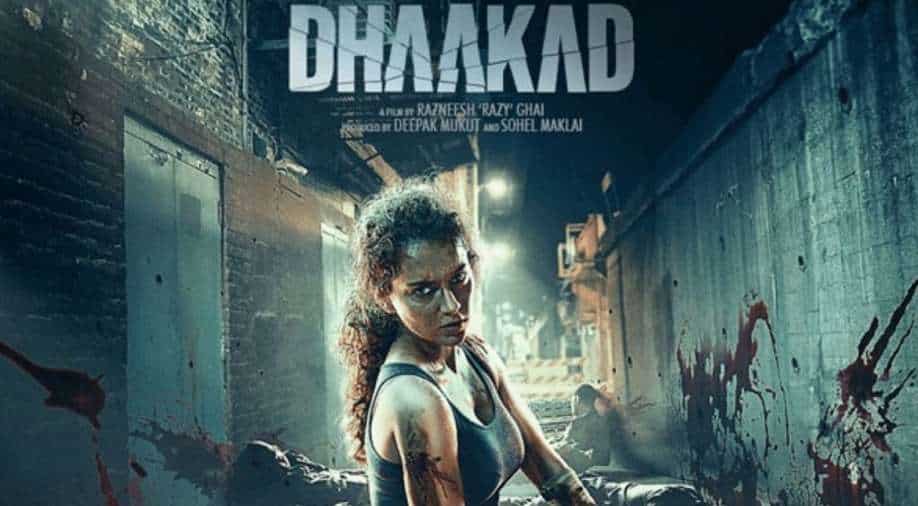 Netizens praised the movie by saying the action begins from the first scene.

After a year-long gap, Ranaut's action-filled drama 'Dhaakad' has been finally released in the theatres today (May 20). Razneesh Ghai's directorial starring Arjun Rampal, and Divya Dutta in pivotal roles is full of action, drama and kickass stunts.

Touted as an action drama, in the movie Kangana is playing an Indian undercover agent and is fighting against the child trafficking racket. In the movie, she's travelling across the Europe and fans will witness some long action scenes and outstanding performances by Kangana, Divya and Arjun.

Meanwhile, the movie's patchy storyline and the overdose of action don't go well with the fans.

A few hours after the movie was released and fans watched the first-day first show, Twitter reactions has started coming in. So far, the movie has recieved mixed reviews from the audiences and critics alike.

Meanwhile, netizens praised the movie by saying the action begins from the first scene by calling it one of the best action-thriller ever made in India.

Just saw Dhaakad! The movie is outstanding & very gripping! 🔥Kangana Ranaut is on fire, Arjun & Divya also nailed it.
My rating: 🌟🌟🌟🌟 #DhaakadReview #KanganaRanaut People who are writing negative reviews are being paid by BB2 makers & are fans of Hrithik/Haters of Kangana🤦🏻‍♂️

Watched #Dhaakad FDFS in Australia #OneWordReview OUTSTANDING #DhaakadReview ⭐⭐⭐⭐ 4/5#KanganaRanaut is Lady Khiladi in a spy role. Brilliant in action and emotions.#ArjunRampal is another actor when playing a villain. He raises the bar.

#DhaakadReview : #Dhaakad is a complete action/thriller and #KanganaRanaut delivered the performance of a lifetime with long action sequence n effortless acting.. Going to watch it again on Sunday with my staff 😁 pic.twitter.com/dkdCh3iMcj

This film is #Dhaakad in every sense. It's on par with any spy films in the global cinema. Kangana Ranaut, I'm so proud of you as a fan, your versatility truly knows no bounds. Direction, cinematography, bgm is top notch. Divya, arjun, saswata were Excellent. #DhaakadReview pic.twitter.com/jWKeRE9oYG

#Dhaakad #DhaakadReview Avoid all reviews and critics, i can guarantee you, that u will find movie worth watching#KanganaRanaut

Dhaakad is a Solid Spy action film studded with some extraordinary performance by #KanganaRanaut & #ArjunRampal, Raw, fast paced and a no nonsense film, action begins right away from scene 1…. MUST WATCH…. #DhaakadReview #AgniAgayi pic.twitter.com/MaBc75hFex

watched #Dhaakad last night. Quick Review Part 1 -
The film is all about #KanganaRanaut . Quite literally. However, she is really good in her action sequences. If there is anyone in #Bollywood who can do such sequences is her.#dhaakadreview