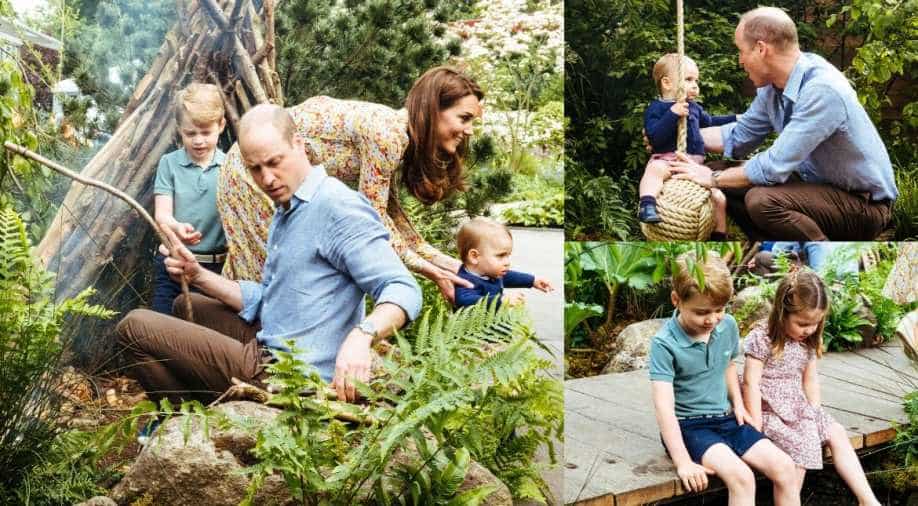 File photo of Kate, Britain's Duchess of Cambridge and her family Photograph:( Reuters )

The Chelsea Flower Show is the most prestigious event in Britain's gardening calendar.

Co-created with landscape artists Andree Davies and Adam White, Kate's 'Back to Nature Garden' includes a rope swing, a tree house and a stream with waterfalls.

Her office said Kate, wife of Prince William, was a strong advocate in the mental and physical benefits that nature and the outdoors had on children and adults alike.

"It's a natural space, a really exciting space, for kids and adults alike to share and explore," she told broadcasters ahead of the opening of the garden on Monday.

"I really feel that nature, being interactive outdoors has huge benefits on physical and mental well-being particularly for young kiddies."

In a video posted on their Instagram account, the couple's three children, George, Charlotte, and Louis can be seen playing on the swing, by a wooden den, and scrambling barefoot through a stream. Louis, who celebrated his first birthday last month, can be seen walking for the first time and waving a stick.

Kate said she had been focusing on early childhood development in her recent charity work.

"I believe that spending time outdoors when we are young can play a role in laying the foundations for children to become happy, healthy adults," she said.

The Chelsea Flower Show, which is open to the press and guests on Monday and to the public from Tuesday to Saturday, is the most prestigious event in Britain's gardening calendar.