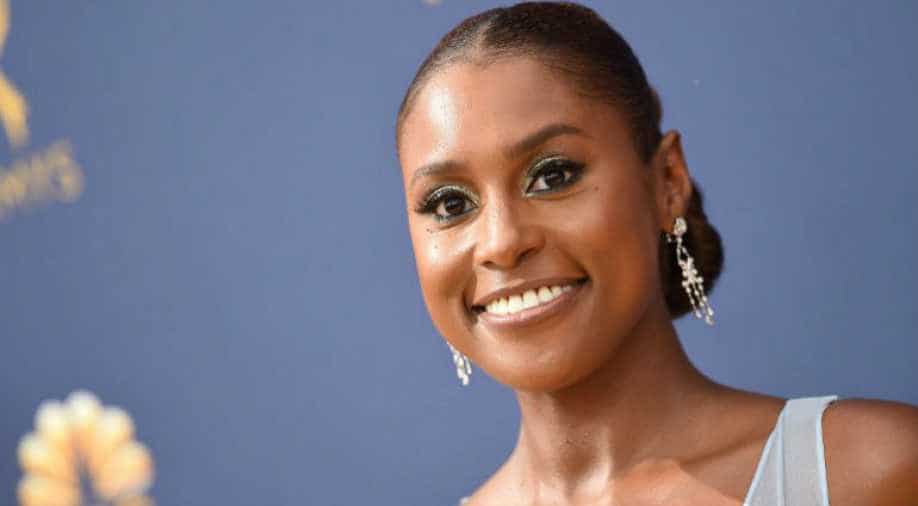 Rae said she grew up in the 1990s watching lots of shows with black characters but that was "wiped away by reality TV".

Rising US star Issa Rae held her hand up Wednesday to sexualising men in her hit television series "Insecure", saying it was time for the "female gaze" to have its day.

The African-American writer and producer, who first broke through playing herself in the cult YouTube series "Awkward Black Girl", admitted she was all for the camera lingering longer on the glories of the naked male.

"Men are more sexualised in the series because we are seeing this through the female lens," she told TV executives at MIPCOM, the world's top entertainment showcase in Cannes, where she picked up its "Personality of the Year" award.

"When I am in the act myself I don't say, 'Ooh! Look at my body!' You are seeing what I see, what I am looking at. It is all very intentional. We are all always seeing titties and ass on screen, this is an opportunity to reverse that."

Rae, 33, admitted that her mother, "a good Christian woman", squirms when she watches parts of her HBO series.

"She hates it. The bad language, the sex... She'll say, 'Why did I even bother with parental control and having you not watching R-rated movies if you grow to make the things that you weren't allowed to watch?'"

Her mother is horrified

But Rae said she makes no apologies for "telling the truth" or seeing the world through the eyes of black women.

"What attracts people is we are telling the truth," she argued.

Nor is she afraid of exploring everyday racism in a world "whose default is white", she said.

"There is an idea that no one wants black women, that we are not considered desirable. Whether it is a myth or not it is something that permeates the world of dating.

"We are living it. Our writer's room is mostly black women... although there is one white guy. We are always telling him, 'Now you can see what it is like for us,'" she joked.

Which is why see she was so surprised to discover that 60 percent of her audience are white.

"That threw me way off," she declared.

Rae said she grew up in the 1990s watching lots of shows with black characters but that was "wiped away by reality TV".

But the success of "Grey's Anatomy" and "Scandal" creator Shonda Rhimes and shows like "Atlanta" proves that even internationally "the idea is not weird anymore to be watching all black people."

She said that when she began producers kept telling her shows needed to be "more multicultural, which meant add a white person.

"In society the default is white and we don't question it. It is very disheartening to feel that your experience doesn't matter," she said.

Even so Rae, whose father is Senegalese and whose mother is African-American, has been criticised for not being black enough - a subject she often addresses in her show.

It is one of many prickly issues that she tackles, including what she calls "the burden of masculinity for many black men".

"If a dude touches another dude's dick he is automatically gay in that mindset," one that many black women also share, she claimed.

Rae said that she was "building to (deal with) other types of sex" in "Insecure", but this was "a sensitive conversation in the black community. You cannot talk about black gay men without being accused of trying to eradicate the race... it is a very touchy topic."