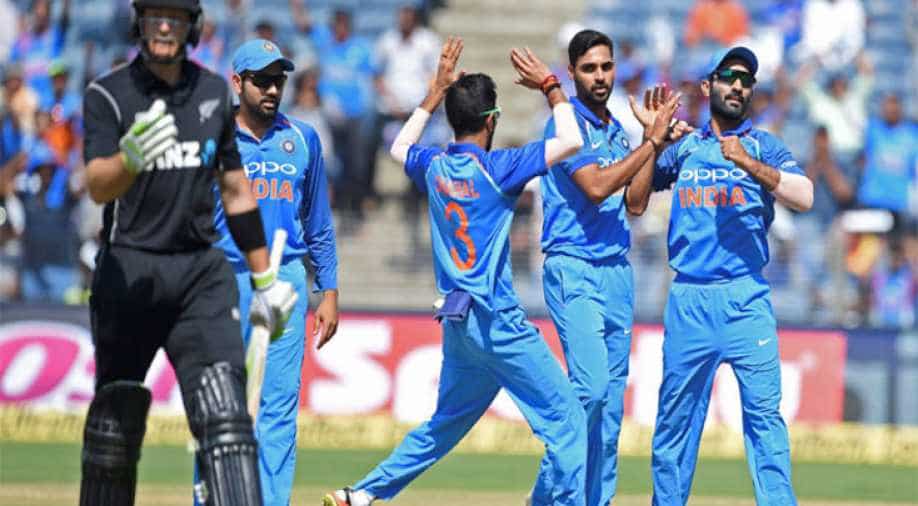 India came up trumps in a battle of nerves against a gutsy New Zealand to win the all-important third ODI by six runs and clinch their seventh successive bilateral series by 2-1 margin on Sunday.

The target was imposing but New Zealand fought gamely through Colin Munro (75 off 62), Kane Williamson (64 off 84) and Tom Latham (65 off 52) before being restricted to 331 for 7 in the wake of some fine death bowling by Jasprit Bumrah.

For the better part of the match, Indian bowlers dished out an ordinary bowling performance but bounced back when it mattered the most in the final three overs.

Required to defend 15 runs in the final over, 'King of Death' Bumrah (3/47 in 10 overs) delivered yet again and conceded only eight runs in the 50th over. More importantly, he bowled an astounding 32 dot balls in his 10-over spell.
It seemed it was game on with the flying start provided left-hand opener Munro.

He set the tone for the daunting task on the very first ball he face, flicking Bhuvneshwar Kumar for a monstrous six over midwicket.

Three more fours including the one from overthrow were to follow in the first over of the innings that went for 19 runs. The in-form Kumar had an off day as he leaked 92 runs from his 10 overs.

While his opening partner Martin Guptill (10) fell cheaply again, Munro and Kane Williamson (64) kept the visitors very much in the hunt with a 109-stand off 105 balls.

The pair batted with supreme confidence on a flat surface, especially Munro who was not afraid to switch hit and charge down against the spinners. It was also a knock of substance from Williamson, who had not fired in the series until tonight.

The two had taken New Zealand to 152 for one in 24 overs before under pressure India bounced back in the match with Yuzvendra Chahal removing the set batsmen. Their fall stopped the run flow and the required run rate per over went beyond eight, leaving the heroes of Mumbai Ross Taylor and Latham a lot to do.

They batted well, completing a 79-run partnership off 69 balls with their team needing 91 off the last 10 overs.

Latham carried on and played flawless to take his team to the brink of victory alongside Henry Nicholls before nerves got the better of them during the business end of the innings.

Earlier, Sharma and Kohli, who became the first ever pairing to complete four double hundred partnerships in ODIs, were simply unstoppable against a New Zealand bowling attack that looked pretty ordinary on the day.

Their spectacular showing also helped India comfortably beat the previous highest score at Green Park, 303 for five that South Africa made against them two years ago.

The destructive duo was in complete control ever since Shikhar Dhawan (14) departed in the seventh over and ended up with a record breaking 230-run stand off 211 balls.

While Kohli had already hit a fine hundred in the series opener, Sharma rose to the occasion after failing in the first two games after New Zealand put the home team in.

The last time he played an ODI here, he made 150, and two years on, the stylish-right hander from Mumbai gave the packed crowd an evening to remember for a long time.

There are not many prettier sights in cricket than seeing Sharma bat in full flow. And he did look in fine form right from the time he slashed a gentle loosener off Tim Southee over point in the first over of the match.

The Kanpur pitch, usually slow and low, played well with the ball coming on to the bat nicely. The signs were ominous for the opposition when Sharma easily picked pacer Adam Milne for a huge six over midwicket.

He gave the same treatment to left-arm spinner Santner in his first over, collecting two boundaries with a cut and sweep before getting to his 50 off 52 balls.

Kohli, on his part, began with two crisp boundaries off Southee, one through the covers and the next one a whip over midwicket.