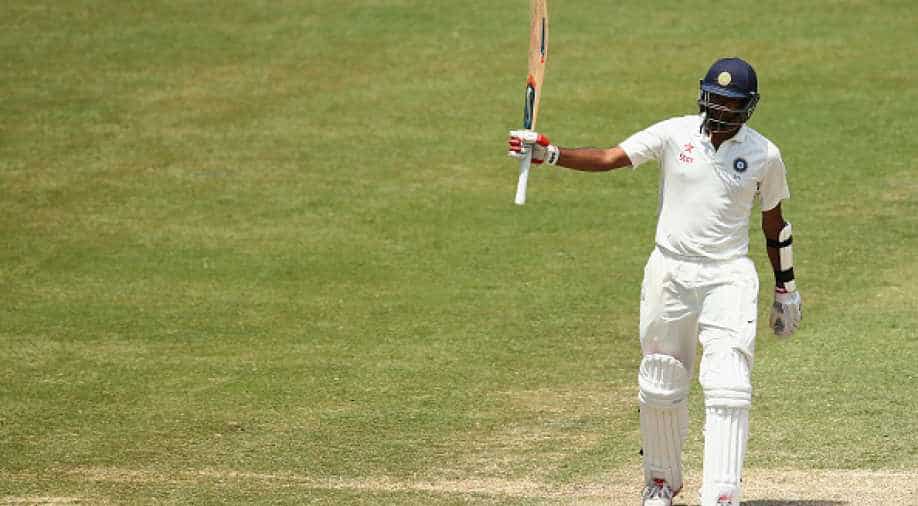 Ravichandran Ashwin hit an attacking half-century to give India the edge after England's bowlers dented the hosts with quick wickets on day two of the third Test in Mohali on Sunday.

India were 271 for six at stumps with Ashwin (57) and Ravindra Jadeja (31) at the crease. The hosts trail by 12 runs in response to England`s first innings score of 283.

Ashwin and Jadeja revived the innings with an unbeaten 67-run stand for the seventh wicket after India lost four of their batsmen in the final session.

Ashwin struck his second successive fifty as he smashed eight boundaries during his 82-ball stay at the crease so far.

He combined with the left-handed Jadeja to take the attack to the opposition in the final hour of play as the duo scored at over four runs an over.

India were cruising nicely at 148-2 until tea, after which a resurgent England wreaked havoc to claim three wickets in the space of 19 deliveries and eight runs.

India, who rode on half-centuries from skipper Virat Kohli, Cheteshwar Pujara and Ashwin, were reduced to 156-5 before bouncing back.

Pujara (51), who recorded his 11th Test half-century, put on 75 runs for the third wicket with Kohli (62) and showed tremendous grit during his 104-ball stay.

Rashid then got a struggling Ajinkya Rahane for nought in his very second over of the session after trapping the batsman lbw.

But it was Jos Buttler who drew the biggest cheers from the visiting crowd after his sharp fielding from point got debutant Karun Nair (4) run out with a direct throw.

However Kohli stayed composed to record his 14th Test fifty as he soldiered on with Ashwin to try and rebuild the innings.

Stokes claimed the prized wicket of Kohli after the star batsman was caught behind.

Stokes, who was reprimanded on Saturday for using offensive language after getting out and exchanging words with Kohli, put his hand over his mouth as the skipper walked back.

Kohli had put up stubborn resistance against a disciplined English pace attack that put up a strong show on a pitch expected to turn as the match progresses.

Earlier, returning wicketkeeper-batsman Parthiv Patel (42) gave the hosts a sturdy start before being trapped lbw off Rashid in the fourth over after lunch.