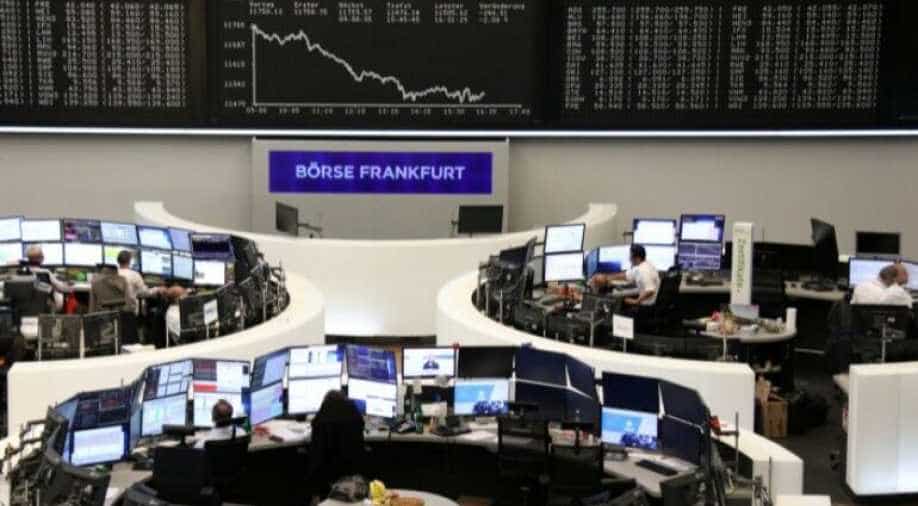 Expectations that the US Federal Reserve and other central banks would respond robustly to the recession warning helped world stocks to steady earlier.

China's threat to impose countermeasures in retaliation for the latest US tariffs knocked stocks sprawling on Thursday, checking earlier attempts to recover from a rout sparked by fears of a world recession.

Wall Street futures signalled another weak open for US stocks, which fell 3 per cent on Wednesday after long-dated bond yields dropped, raising fears the US economy was hurtling towards recession and dragging world stocks with it.

Expectations that the US Federal Reserve and other central banks would respond robustly to the recession warning helped world stocks to steady earlier. But that recovery was cut short by the latest rhetoric from Beijing

"The only game in town is the central banks, hence the bond markets are rallying," said Peter Schaffrik, global macro strategist at RBC Capital Markets.

"We have regional bonfires in Hong Kong, Argentina, Japan against South Korea, and none of these is going away easily; everyone is not necessarily strong enough to cause trouble."

Recession fears grew on Wednesday after yields on 10-year Treasury bonds dropped to less than two-year rates for the first time in 12 years when the same yield curve inversion presaged the 2008 recession.

The curve has inverted before every recession in the past 50 years and sent a false signal just once.

The latest inversion has since reversed, albeit marginally, and yields on 30-year Treasuries rose off the record 1.965 per cent low reached in Asian trade. But they are still down 60 basis points in just 12 sessions.

Markets appear to be pinning their hopes, yet again, on central banks, betting that scale of the scare would alarm policymakers, especially at the Fed.

Money markets price in a growing chance the Fed will cut rates by half a point at its September meeting.

"We have seen stocks trading very poorly as a result of the yield curve inversion, so that will be flashing some additional warning lights for the Fed that they have to do more," said Andrea Iannelli, investment director at Fidelity International.

"The only question is, can the Fed out-dove the market? At the very least they will have to match market expectations in the short term."

The Chinese comments sent a pan-European equity index down half a per cent and markets in London and Frankfurt lost over 1 per cent. Earlier, Asian shares fell 0.5 per cent.

German 30-year yields are below minus 0.2 per cent for the first time. Ten-year yields touched a record low of minus 0.67 per cent.

The growth worries come amid economic stress in Argentina and some other emerging markets, fears of Chinese military intervention in Hong Kong and trade tensions that show no sign of abating.

"Hoping for the best on the policy front but positioning for the worst on the economic backdrop seems to be the flavour of the day," said Stephen Innes, a managing partner at Valour Markets. "The Fed, now out of necessity alone, will need to adjust policy much more profoundly than they expected."

Not everyone buys the argument that recession is inevitable bond markets have been distorted by a decade of multi-trillion-dollar central bank stimulus.

Mark Haefele, chief investment officer at UBS Global Wealth Management, said how long the curve remained inverted, and to what extent, was crucial.

"If Fed rate cuts successfully steepen the curve comfortably into positive territory, this brief curve inversion may be a premature recession signal. Neither does a yield curve inversion indicate it is time to sell equities," Haefele said.

He noted that since 1975, every curve inversion had been followed by an S&P 500 rally that lasted almost two years and delivered average gains around 40 per cent.

As the Sino-US trade war escalates, long-dated bond yields have fallen across the developed world, flattening yield curves in what is considered a clear signal of a worsening growth outlook.

What sent the US curve over the brink into inversion was German data on Wednesday that showed the economy had contracted in the quarter to June. That came on the heels of dire Chinese data for July.

The British yield curve also inverted. The German curve is at its flattest since 2008.

Oil prices plunged with Brent crude losing another 2 per cent to $58.4 a barrel, after shedding 3 per cent overnight.

The yen was flat at 105.8 to the dollar, having earlier traded at 106.74. The currency has gained against the dollar for eight of the past 10 sessions. Excluding a mini-crash episode in January, it recently hit 17-month highs.