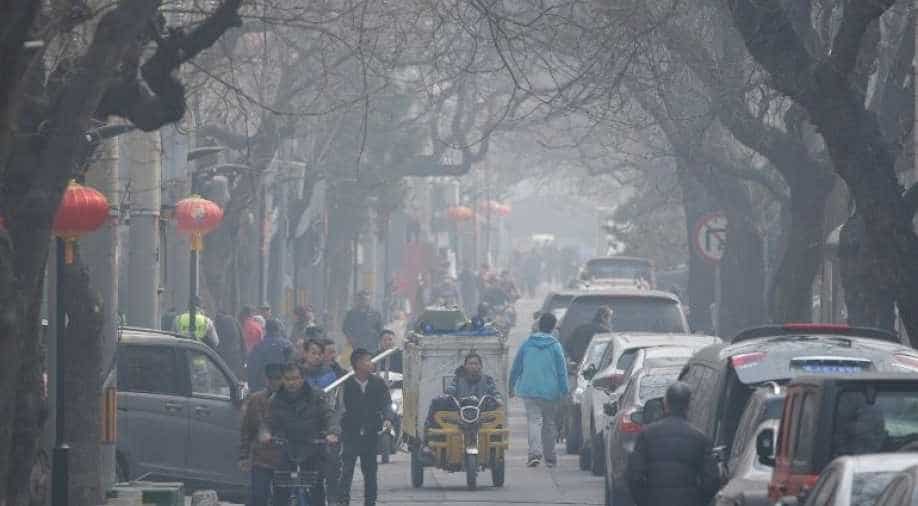 FILE PHOTO: People are seen in a traditional alleyway, or Hutong, on a polluted day in central Beijing, China Photograph:( Reuters )

Absolute coal consumption, however, has continued to increase in line with a rise in overall Chinese energy demand

China raised its coal-fired power capacity by 42.9 gigawatts (GW), or about 4.5 per cent, in the 18 months to June, connecting new projects to the grid at a time when capacity in the rest of the world shrank, according to a study published on Wednesday.

China also has another 121.3 GW of coal-fired power plants under construction, US-based research network Global Energy Monitor said in its report, nearly enough to power the whole of France.

The increase followed a 2014-2016 "permitting surge" by local governments aiming to boost growth while formerly suspended projects have also been restarted, Global Energy Monitor said. In the rest of the world, coal-fired power capacity fell 8.1 GW over the same period.

To cut pollution and greenhouse gas emissions, China has promised an "energy revolution" aimed at dramatically reducing its reliance on coal. It cut coal's share of the country's total energy from 68 per cent in 2012 to 59 per cent last year, and researchers predict it will fall to 55.3 per cent by 2020.

Absolute coal consumption, however, has continued to increase in line with a rise in overall Chinese energy demand.

And environmental groups have accused Beijing of relaxing its efforts on coal, pointing to remarks in October by Premier Li Keqiang, who urged China to make greater use of its coal "endowment" by building clean power plants.

China approved new 40 coal mines in the first three quarters of 2019, and it has continued to make use of "green" financing to support coal-related projects.

It urged the government to strengthen policies discouraging coal plants, support low-carbon power and move toward clean energy, while an investor body warned of the risk of building new coal-fired plants.

"Over 40 per cent of China's existing coal fleet is already estimated to be loss-making," said Stephanie Pfeifer, chief executive of the Institutional Investors Group on Climate Change.

Though costs are now as low as fossil fuels, some Chinese policymakers worry renewables like wind and solar are unreliable, and there are concerns that decarbonisation will hurt the country's coal regions.

"Right now there is a big argument about whether China needs more coal-fired power or not," he told Reuters. "They think the fourteenth five-year plan (2021-2025) will stimulate economic development and they are a little afraid there won't be enough electricity to support the economy."