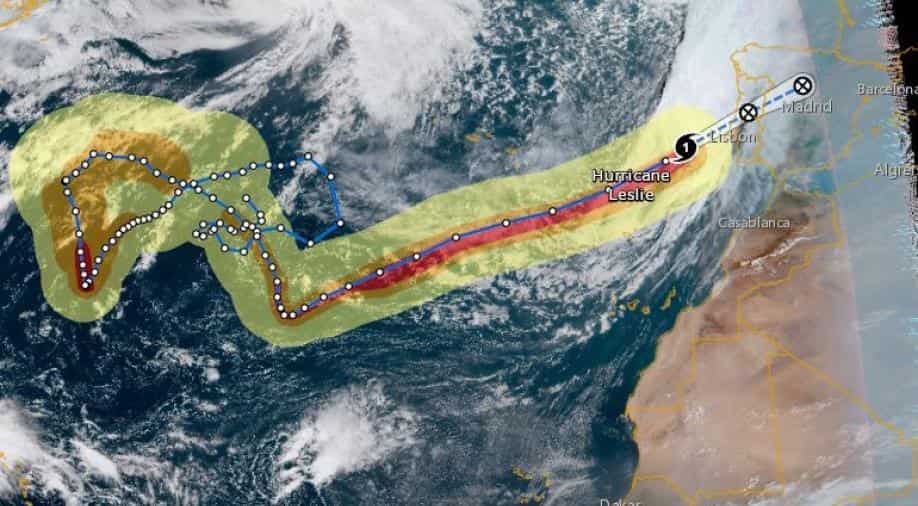 Hurricane Leslie, image via National Oceanic and Atmospheric Administration, US Photograph:( Others )

There were fears it could be the worst storm to hit the region in more than 150 years.

The region around capital Lisbon and the centre of the country at Coimbra and Leiria were worst hit with trees uprooted, cars and houses damaged and local flooding reported.

Aveiro, Viseu and Porto in the north also suffered damage with rescue services reporting a total of 1,900 incidents.

The civil defence services said 324,000 people were left without electricity while more than 60 people had to leave their damaged homes and flee to safety.

Power was being restored across the north and centre of the country during the morning.

Leslie was dubbed a "zombie" hurricane as it first formed on September 23, only to meander through the Atlantic Ocean for weeks.

There were fears it could be the worst storm to hit the region in more than 150 years, but it weakened to a post-tropical storm before reaching the Portuguese coastline in the early hours of Sunday.

"The greatest danger has passed," Costa said. "The north and centre were the worst affected."

At Mealhada, in Aveiro district, the roof blew off an indoor sports stadium putting an end to the European final of the women's roller hockey competition.

Portuguese authorities had urged those living by the coast to batten down and stay indoors amid warnings of high winds which reached 176 kilometres per hour (110 miles per hour).

"I have never seen anything like it," one witness told SIC television in Figueira da Foz, 200 km (120 miles) north of Lisbon.

"The town seemed to be in a state of war with cars smashed by fallen trees," he said. "People were very worried."

Maritime authorities advised fishermen at sea to return to the nearest port and Portugal's TAP airline cancelled seven flights to and from Lisbon.

Only five hurricanes have ever arrived in this region of the Atlantic Ocean, and it had been feared Leslie could turn out to be the most powerful storm to hit Portugal since 1842.

Over the past 176 years, only Hurricane Vince has made landfall on the Iberian peninsula, hitting southern Spain in 2005, according to weather records.

In October 2017, strong winds from Hurricane Ophelia, which travelled north off the coast of Portugal and western Spain, fed forest fires that killed around 40 people during a heatwave.

Ophelia then made landfall in Ireland as a violent storm, killing three people.

Spain's civil protection agency said the storms could still be "very strong locally" and that heavy rain was forecast for the north and east.