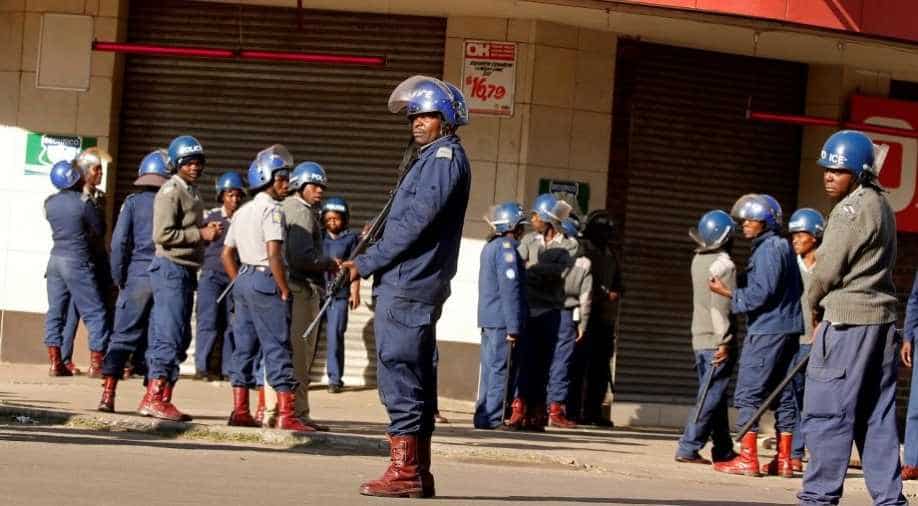 Zimbabwe police fired tear gas and beat scores of opposition supporters gathered in central Harare on Friday, as authorities moved to enforce a ban on an anti-government protest that the country's high court had upheld.

More than a hundred Movement for Democratic Change (MDC) supporters defied the ban, witnesses said. They clashed with police who fired tear gas and water cannon, chasing them from one of the city's main squares with batons and drafting in reinforcements to prevent the group from re-assembling.

Friday's street demonstration was to have been the first in a nationwide series of protests organised by the MDC, which accuses Emmerson Mnangagwa's government of state-sponsored violence, corruption and economic mismanagement.

But with armed police having barred access to the party's Harare offices and its court appeal against the ban having failed, it called the protest off, denouncing what it labelled the actions of a fascist government.

The ban - announced late on Thursday by police who said any demonstrators would be committing a crime - had exposed the government's true colours, party Vice President Tendai Biti told reporters outside the court.

"The constitution guarantees the right to demonstration ... yet this fascist regime has denied and proscribed this right to the people of Zimbabwe," he said on Friday.

"...We have jumped from the frying pan into the fire after the coup of November 2017... We don't accept the conduct of this regime, the conduct of Mr Mnangagwa."

In Geneva, a spokesman for the UN human rights commissioner urged the government to engage with citizens on legitimate economic grievances and "stop cracking down on peaceful protesters."

The series of demonstrations has been widely viewed as a test of how Mnangagwa, who has so far this year failed to make good on promises of political and economic reform, responds to dissent in a country tainted by a long history of repression.

Elected after the armed forces intervened to oust Robert Mugabe, Mnangagwa has said he aims to break with the long legacy of repression that characterised much of his predecessor's 37 years in power.

But the economy is mired in its worst crisis in a decade, and Mnangagwa is struggling to convince the growing ranks of poor citizens that his government's austerity measures and reforms can trigger a recovery.

Zimbabweans had also expected last year's vote to usher in a new dawn of expanded political rights and an end to the country's international pariah status, but instead, the elections left the country more polarised.

Apparatus of the state

In January, a violent security crackdown in Harare against fuel demonstrations left more than a dozen people dead.

Days ahead of the planned Harare demonstration, six political activists were abducted from their homes at night and beaten by armed men, a coalition of rights groups said.

On Friday, the apparatus of state was out in force again and the city's streets were unusually quiet.

One woman was taken to hospital by ambulance after sustaining a deep gush on her head when baton-wielding police charged at MDC supporters.

"We want change because we are tired of promises. We are tired, enough is enough," MDC member Patience Gurure told Reuters moments before police dispersed the group.

By 12 noon (1000 GMT), businesses, including banks and shops, had closed. The few employees who had come to work were told to go home.

Anger is mounting as Zimbabweans grapple with soaring inflation, rolling power cuts and shortages of US dollars, fuel and bread.

In a letter to church leaders published on Friday in the state-owned Herald newspaper, Mnangagwa said the economic hardship had its roots in sanctions imposed by the West more than a decade ago as well as a severe drought this year.

He also said MDC leader Nelson Chamisa had rejected his invitation to dialogue meant to resolve Zimbabwe's political and economic problems. Chamisa has said he will only sit down with Mnangagwa if there is a neutral arbiter.

"The doors of national dialogue are still open to all political leaders including to the leader of the MDC," Mnangagwa said.

While political leaders argue, wages and pensions continue to be eroded by triple-digit inflation, bringing back bad memories of the hyperinflation of a decade ago, which forced the country to ditch its currency.