World Book Day: Five novels to watch out for in 2018 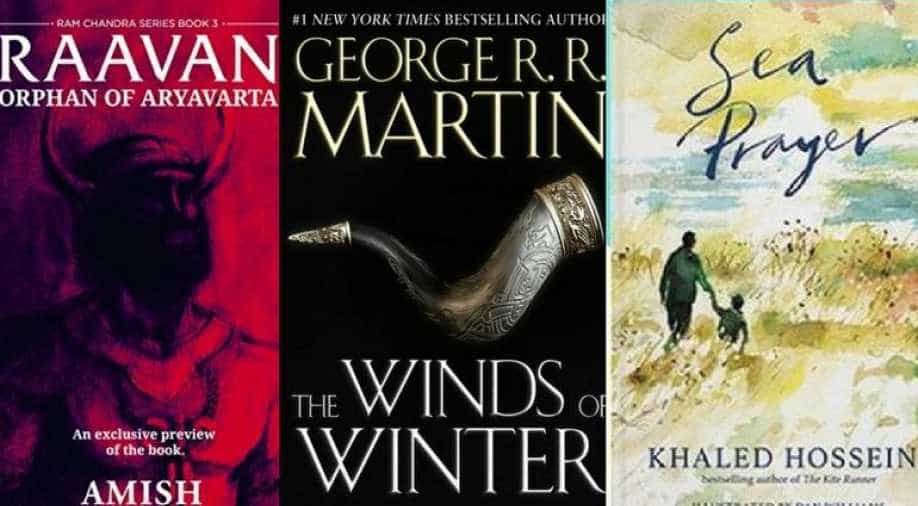 Books cover page courtesy: Amazon for Raavan: Orphan of Aryavarta; Twitter/Gameofthrones for The Winds of Winter; instagram.com/khosseini for Sea Prayer. Photograph:( Others )

As the bookworms around the world are celebrating World Book Day on Monday. We are looking at the list of five books that are scheduled to release in 2018.

Author of bestselling books like "Kite runner" and "Thousand Splendid Suns" Khaled Hosseini is coming up with his new book this year which is expected to release in September in the United States.

The Sea prayer's plot is based on refugee crisis and it revolves around a story of character name Alan Kurdi who is forced to leave his home due to war.

While making the announcement on Instagram, Hosseini wrote  "I am proud to announce the forthcoming publication of SeaPrayer (UK: 30th August, US: September 18), illustrated by Dan Williams. We are living in the midst of a displacement crisis of enormous proportions. #SeaPrayer is an attempt to pay tribute to the millions of families, like Alan Kurdi’s, who have been splintered and forced from home by war and persecution."

The Winds of Winter by George RR Martin

Author and scriptwriter of popular "Game of Thrones" George RR Martin is currently writing sixth installment of "The song of Ice and Fire" series name "The Winds of Winter". Though the book has missed numerous deadlines from 2015 however however 2018 is expected to the year of his this eagerly awaited book will hit the shelves.

The Winds of Winter is coming after seven years of since the release of "A Dance with Dragons" which is the most recent book of the series.

During the media interview. George RR Martin informed that Lady Stoneheart would an important character of the entire book as she became a vengeful and merciless killer after Catelyn's ressurection.

Best known for "The Immortals of Meluha, "The Secret of the Nagas", "Ram: Scion of Ikshvaku" and "Sita: Warrior of Mithila" Amish Tripathi will return in 2018 with "Raavan: Orphan of Aryavarta" this year.

The book is expected to release by the end of the this year. No official release date has been announced yet but Amish has assured his fans that it will not be delayed like his last "Sita: Warrior of Mithila" book.

However, the book's preview is exclusively available for Kindle users on Amazon.

The plot is based on mythological charcater Raavan of Ramayan in which he seeking revenge for his sister Shurpanakha after she was insulted Laxman the younger prince of Ayodhya. Knowing that the trio is on exile in Dandakarabta Raavan flies in order to capture Vishnu.

Pajamas are Forgiving by Twinkle Khanna

Author, newspaper colmnist and former film actress Twinkle Khanna will again tickle funnybones of readers in 2018 with her new book "Pajamas are Forgiving".

The release date has not been announced yet.

Titled "Pajamas are Forgiving", the novel is about a woman character who is stuck in an ayurvedic retreat with her ex-husband and his younger second wife.

Twinkle Khanna is known for her "Mrs Funnybones", a compilation of her columns, and "The Legend of Laxmi Prasad", an anthology of short stories.

When Life Gives You Lululemons by Lauren Weisberger

Emily Charlton famous author of the bestseller "The Devil Wears Prada" is currently working on her new book titled "When Life Gives You Lululemons" which revolves around the life of character name Emily, who is working as an image consultant of the Hollywood stars but however isn’t very good at it.

The book will be about a journey of Emily and her two other friend who need each other to get through their this tumultuous phase of their lives.