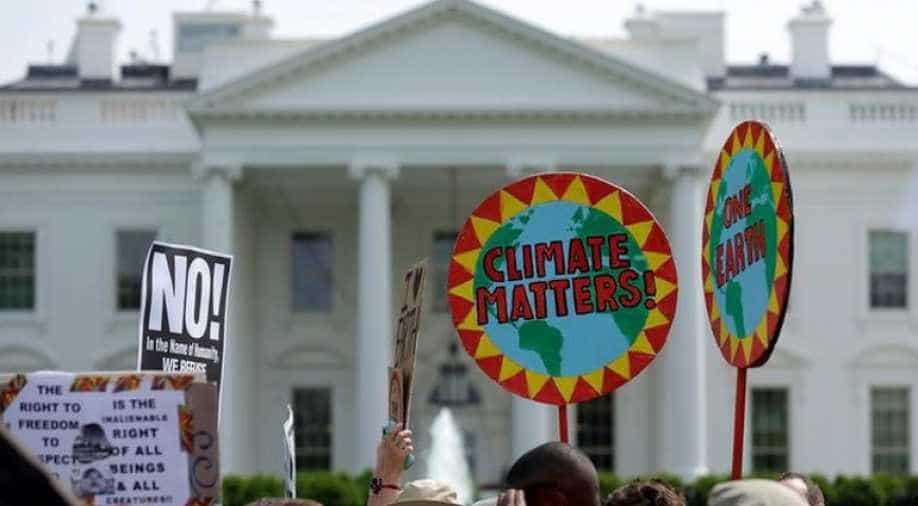 Protesters carry signs during the Peoples Climate March at the White House in Washington on April 29. Photograph:( Reuters )

A crunch White House meeting to help decide whether or not the United States pulls out of the Paris climate accord was postponed Tuesday, as President Donald Trump's top aides weighed how to proceed.

Administration officials said the crunch sit-down set for Tuesday had "been postponed" and may now take place next week.

That means there is unlikely to be clarity before climate negotiators conclude a meeting in Bonn, where they are going over the nuts and bolts of how the agreement will work.

Trump's inner circle has been tasked with providing the president, who has flirted with ditching the landmark agreement, with a range of policy options.

After months of uncertainty, Trump appears to be edging toward a decision on whether to honour the landmark 2015 agreement to limit global warming.

One option said to be under consideration is full withdrawal, which would fulfill Trump's campaign promise to "cancel" the deal as president.

On the campaign trail, the Republican billionaire frequently derided the 2015 accord, which aims to limit global emissions and halt temperature increases.

Bannon and Pruitt are said to be among those arguing for a tougher line, keeping with campaign promises and rejecting global agreements that tie the hands of US industry.

Pruitt, the US government's leading environmental official, has rejected the scientific consensus that humans are the "primary contributor to the global warming that we see."

But full withdrawal would roil Washington's allies and seriously undermine global efforts to limit carbon emissions, which the vast majority of experts say are changing the climate in dangerous ways.

Ivanka Trump has meanwhile become a talisman for those who believe she can be a moderating influence on her father. But her stance on the Paris accord and her influence inside the cut-throat world of White House politics are unclear.

The United States is the world's number two carbon polluter, after China.

For US allies, Trump's wavering has uncomfortable echoes of president George W Bush's decision to withdraw from the 1992 Kyoto Protocol.

The core of the Paris deal was an agreement between Chinese President Xi Jinping and then US president Barack Obama. Both men have this week pressed Trump to stay on board.

"It's important that big countries that are big emitters like the US and China... lead the way," Obama told a conference on Tuesday in Milan, at one of his first public appearances since leaving office.

Xi meanwhile pledged to protect the accord during a phone call with French President-elect Emmanuel Macron.

Another possible option for Trump, according to officials, is to remain within the agreement, but rework US emissions targets.

Sue Biniaz, a former State Department legal adviser who supports the accord, admitted Trump does not need to make a binary choice between leaving or staying.

"It is clear from the agreement that if you do change your target, you are encouraged to change it in a more ambitious direction," she said.

"But it is equally clear that you are not legally prohibited from changing it in any direction that you choose."

Officials stressed that Trump has yet to make a decision either way.