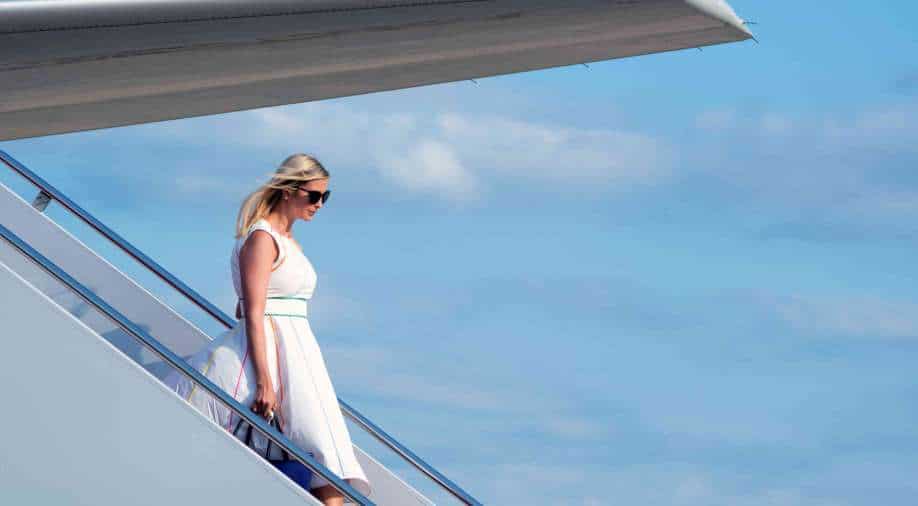 As much as it’s possible, the Trump campaign is attempting to deploy the first daughter as a demographic paratrooper targeting at-risk women of the changing suburbs.

FRANKLIN, Wis. — President Donald Trump had just been on "Fox and Friends," demanding that his attorney general “act” against his opponent before the election. He had, the day before, called Joe Biden a “criminal,” Dr. Anthony Fauci a “disaster,” government scientists “idiots” and members of the news media “real garbage.”

Ivanka Trump, meanwhile, was visiting suburban Milwaukee and Franklin for none of this.

“I learned that the first ice cream sundae was created in this amazing state!” the president’s older daughter and senior White House adviser said from a small stage of a sunlit function room overlooking a pond.

There would be no mentions of Hunter Biden in here, no reference to Hillary Clinton, “Barack Hussein Obama,” China virus, witch hunts, fake news, antifa or rigged elections.

Instead, the first daughter came armed with local fun facts and pleasing asides. She skipped the Trump-branded red meat and went straight to dessert.

“Wisconsinites eat 21 million gallons of ice cream a year,” she shared as an icebreaker. She likes to collect souvenir trivia like this from the road, which she will then serve up at home as cool mom fodder.

“My children, upon hearing this, want to move to Wisconsin,” she continued. “So, the Kushners might be coming to town!”

The crowd was heavy with the just the kind of white suburban female voters who have become her father’s demographic kryptonite. They have been fleeing his coalition with such abandon that he has recently been reduced to begging. “Suburban women, will you please like me?” the president pleaded at a rally in Pennsylvania last week.

By wide margins, they do not, especially the white suburban voters who went for Donald Trump last time. A remarkable 56% of white women said they held a very unfavorable view of the president in a New York Times/Siena College poll. These include many independents and former Republicans who self-identify as moderate or conservative and are likely to be put off by the president’s more boorish inclinations.

As much as it’s possible, the Trump campaign is attempting to deploy the first daughter as a demographic paratrooper targeting at-risk women of the changing suburbs.

Speaking to a gathering in the wooded outskirts of Milwaukee — a polite, professionally dressed and economically comfortable group — she focused more on points of friendly consensus (who doesn’t love ice cream?) and seemed determined to offer a stark departure, at least rhetorically, from the tornado of grievance and belligerence that has marked so much her father’s campaign.

She was happy to leave that to her dad and brothers and the rest of the boys. Eric Trump did a raucous, partially masked rally in the packed basement of a bowling alley here last week. Later, Donald Trump Jr. would appear on Fox News and link Hunter Biden, Joe Biden’s son, to “human trafficking and prostitution rings.” Sen. Ron Johnson, R-Wis., told a Trump rally in Janesville last weekend that supporters of Biden “don’t particularly love America.”

Wisconsin is home to both the fierce devotion and revulsion that has burned for Donald Trump from the outset. It is as hotly contested and divided as any state. The discord has even extended to the stars of Happy Days — set in the Milwaukee suburbs of the 1950s. Ron Howard (who played Richie Cunningham), Henry Winkler (Fonzie) and other alums of the show joined a “virtual reunion” of the cast to raise money for Democrats. But Chachi was not cool with this at all.

“What a shame to use a classic show like Happy Days about Americana to promote an anti-American socialist,” tweeted Scott Baio, a vocal Trump supporter who played Fonzie’s apprentice cousin on the beloved sitcom.

It is not clear that any safe zone is possible inside the Trump enterprise, given the president’s all-consuming personality and the commotion of his presidency. “The first family, including the president, are all going to have different styles,” explained Mercedes Schlapp, a former White House official and campaign surrogate who asked questions of the first daughter onstage during her appearance in Franklin. “It’s important to talk about what the president has done for this country in a short period of time,” Schlapp said in an interview. “It’s important not to get lost in the noise that so much of the mainstream media is wrapped up in.”

Schlapp was asked whether Donald Trump himself was responsible for creating some of that noise.

“Look,” Schlapp said, chuckling, “The president punches when he needs to punch.” His daughter has her own story to tell, and her own way of telling it.

Still, a surrogate can stray only so far from a campaign’s dominant message and messenger. Ivanka Trump could speak with endless poise about all the important lessons her father instilled (“Find something you’re passionate about, because that’s the path to happiness”). She could focus on suburban parenting concerns such as school choice and education reform, and lament “the loss of social interaction for our kids” during the coronavirus outbreak. She could avoid any talk of immigration, caravans, walls or family separation.

And then, later in the day came a report that the parents of 545 children who had been separated from them at the southern border could not be located.

“On the one hand, a president’s family member can offer a softening and humanizing touch,” said Gil Troy, a presidential historian who has written extensively on first families. In such a polarized and binary environment, he added, Ivanka Trump can still offer some measure of reassurance for Republicans who do not like her father but who would be loath to support Biden. “Ivanka can still be proof that is ‘See, he’s not that bad,’” Troy said. “She is trying to be some port in the storm.” At a certain point, though the contrast becomes too stark. “It becomes almost a countercampaign rather than a supporting one,” he said.

And while Ivanka Trump may avoid the vitriolic language of her father and brothers, she has been connected to policies and actions that critics find just as distasteful or ill-advised. She was, reportedly, a proponent of her father’s march across Lafayette Square last spring during protests against racial injustice, culminating in a Bible-waving photo-op in front of the fire-damaged St. John’s Church. The widely derided performance stands as one of the most notorious spectacles of the Trump presidency.

As perhaps the president’s most influential aide, his daughter tends to be studiously quiet in public, even over policies she is believed to personally oppose. Yet she has shown a knack for oblivious gestures: drawing backlash, for instance, after she tweeted a photo of herself cuddling her 2-year-old son amid reports of migrant children being forcibly taken from their mothers by border agents.

Ivanka Trump and her husband, Jared Kushner, also offer ready-made foils of privilege. The Lincoln Project, a super PAC of anti-Trump conservatives, sponsored two Ivanka and Jared themed billboards in Times Square this past week; one featured a grinning Ivanka Trump next to national and statewide death tallies from the coronavirus. (The couple has demanded their removal and threatened legal action.)

On the reelection trail, she is offering a campaign version of daytime TV.

“It’s a breath of fresh air to hear that positive tone,” said Joe Krupa of Franklin through a navy blue, MAGA-emblazoned mask. “I’m really sick of all the Debbie downers and the negativity,” he said. To be clear, Krupa said he blamed this negativity on the rampant “hatred for Trump” that exists from Democrats and the biased media. Hunter Biden’s work for a Ukrainian energy company, he added, “should be an even bigger scandal than Watergate.” Krupa seemed to be getting slightly worked up for a second but stopped himself — as if this was not the right vibe for the Ivanka Hour.

“It’s more of the boys’ role to talk about Hunter Biden and all of the other stuff that’s wrong with Joe Biden,” said Krupa’s friend, Lois Dombrowski of Caledonia, another Milwaukee suburb.

In her remarks, Ivanka Trump spoke of her father’s willingness to look beyond party orthodoxy and support creative solutions: one local example involved an initiative to help Wisconsin farmers whose goods were shut off from supply chains after the coronavirus hit. “Farmers were literally taking this beautiful milk and pouring it down the drain,” Trump said.

Like her father, she is fond of breathless adjectives (“amazing” “unbelievable”) and applying them to common nouns (“beautiful milk”)

“Why do you do what you do every day?” Schlapp asked the first daughter. How does she endure all the incoming — all the attacks, biases, hatreds and all she had to deal with?

In short, Ivanka Trump said she does what she does for the same reason her father does what he does — for love.

“We love this country, we love the people of this country,” she said. “For all the negativity, for all the noise and all of the biased reporting that the president receives, the outpouring of love and prayers” — the she paused — “The love is just a beautiful counterbalance.”

In a sense, Ivanka Trump is still attempting to serve as a counterbalance of her own to an otherwise dark campaign. She aims to present, for what it’s worth, an alternative reality check to a version of Donald Trump that seems deeply embedded at this late stage.

Of all the Trump ambassadors, she offers the most disciplined message, sharing a pitch that rarely makes reference to “idiot” scientists or hoaxes of any kind. Among family surrogates, she makes an odd kind of black sheep.