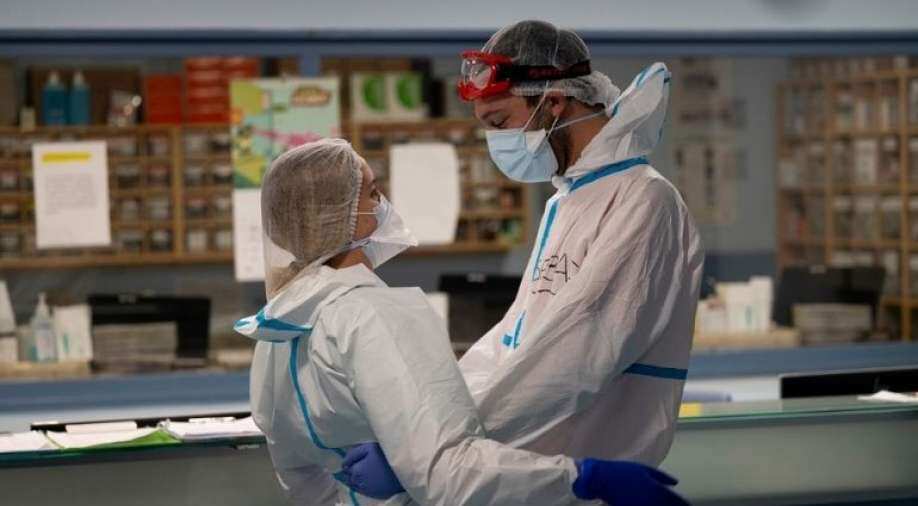 Two healthcare workers hug each other at the Intensive Care Unit (ICU) of the Severo Ochoa University Hospital in Leganes on October 16, 2020. At Severo Ochoa hospital in a Madrid suburb badly-hit during the pandemic's first wave, the intensive care unit Photograph:( AFP )

As the coronavirus quarantine stretched into months, hugs are among the things isolated people found themselves aching for. Hugs are good for humans — perhaps more valuable than many of us realize

Alexis Block was worried that the robot she had built was malfunctioning. She was testing the optimal hug duration for her “HuggieBot 1.0,” a purple-furred squeeze machine. Block had built pressure sensors into the machine’s torso, so if the human tester tapped or squeezed the robot on the back, it let go. But this hug was going on and on. “I worried that the pressure sensors were malfunctioning,” she said.

Her palms began to sweat (getting stuck in the clutches of a giant robot is no one’s idea of a good time). But then, the hug ended, and the HuggieBot released its test subject. When Block, who is working toward her Ph.D. at the Max Planck ETH Center for Learning Systems in both Stuttgart, Germany, and Zurich, Switzerland, asked the subject if something had gone wrong, he surprised her by saying that he had wanted the hug to last a long time. “He said, ‘I just needed it, and the robot wasn’t going to judge me.’ ”

As the coronavirus quarantine stretched into months, hugs are among the things isolated people found themselves aching for. Hugs are good for humans — perhaps more valuable than many of us realize.

Research has shown that hugs can lower our cortisol levels during stressful situations and can raise oxytocin levels and maybe even lower our blood pressure. A 2015 paper published in Psychological Science even found that study subjects who got more hugs were less likely to get sick when exposed to a cold virus than those who weren’t hugged as often.

“The need for human contact is extremely profound,” said Judith Hall, a psychology professor emeritus at Northeastern University who researched interpersonal touch at the university’s Social Interaction Lab. But whether to hug someone or not sometimes seems touchy.

Not everyone enjoys having his or her body squished against yours — as evidenced by the wealth of “Not a Hugger” T-shirts available online. Block’s best friend defines herself as “not a hugger.” She makes an exception for Block, but “she told me she actually preferred hugging my robot to hugging me because sometimes I don’t let go,” Block said.

It’s not always clear how long your hugging partner wants to hug or how tight the embrace should be. It’s often a matter of judging the other person’s comfort level.

Which brings us to the first rule of Hug Club: You don’t have to hug anyone you don’t want to, and it’s best to ask before going in for a squeeze. While, of course, you can simply say, “Can I hug you?” Dr. Wendy Ross, director of the Center for Autism and Neurodiversity at Jefferson Health in Philadelphia, said a better way to ask is: “Some people like hugs; some don’t. What do you prefer?” This framing makes the question about the other person’s preferences.

Ross noted that asking for consent for interpersonal touch is crucial. This extends to children, too — no matter how much you want a hug from your niece or nephew. “We’re sending our kids really mixed messages when we say ‘our bodies are our own,’ but also, ‘you need to hug your grandma,’ ” said Regine Galanti, a child psychologist who practices in Long Island, New York. While it may be challenging to explain to grandma why your child rejected her hug request, in the long run it will help your child understand that it’s OK to deny anyone access to your body.

The good news is that once you’ve established that your hugging partner wants a hug, you’ll probably pick up on cues as to how long it should last. Sabine C. Koch, a psychologist and dance movement therapist who is head of the dance therapy master program at SRH University Heidelberg and director of the Research Institute for Creative Arts Therapies, published a paper in 2017 in the journal Behavioral Sciences on how people signal the end of a hug.

Koch, who also studies embodied communication and body rhythms at Alanus University in Bonn, sent graduate students out to train stations and student unions to watch as people hugged, paying particular attention to what happened right before the two parties separated. The students noted that hugs shifted from soft, “round” movements into a series of pats on the back — which she calls a “fighting rhythm.” Right after the pats started, the hug ended.

“In most of the cases, people first of all have this very soft hug, and whenever a certain time was passing, they started to pat on the back, and then they separated,” she said. “This was true for all combinations of women with men and women with women.” But for men hugging men, it wasn’t true. Their hugs began immediately with patting on the back — that fighting rhythm.