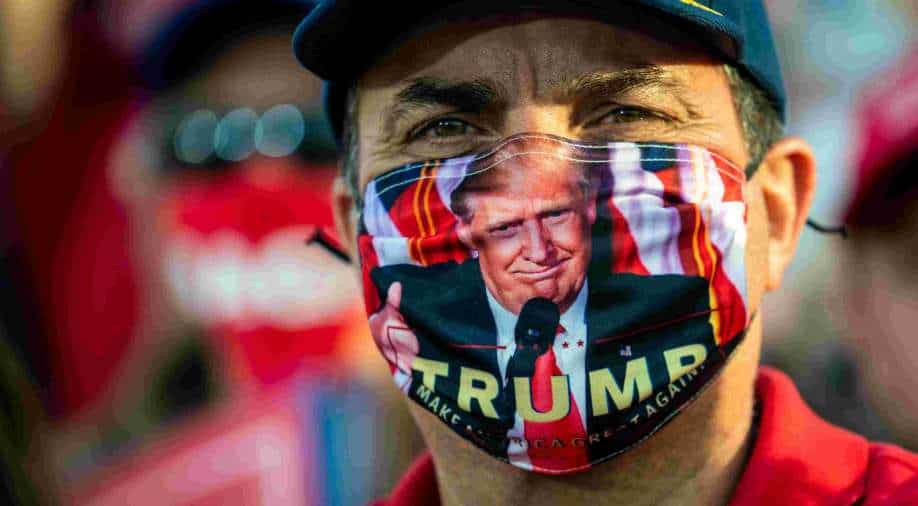 President Donald Trump, in his personality and policies, has presented himself as hypermasculine: tough, plain-spoken, the patriarch who is unafraid to offend and unapologetic when he does. Joe Biden has emphasized family, empathy and caring for others — the loving, supportive and protective father.

If the 2016 election pitted feminism against machismo, this one asks voters to consider what masculinity means.

President Donald Trump, in his personality and policies, has presented himself as hypermasculine: tough, plain-spoken, the patriarch who is unafraid to offend and unapologetic when he does. Joe Biden has emphasized family, empathy and caring for others — the loving, supportive and protective father.

Despite trailing in polls nationally by an average of around 9 percentage points, Trump has continued to lead Biden with male voters. Now, in the final days of the campaign, both sides are trying to appeal to voters’ sense of what a man should be.

Last week, a male conservative pundit posted a photograph on Twitter of Biden embracing his son Hunter, and asked, “Does this look like an appropriate father/son interaction to you?” A female conservative media figure taunted Biden for wearing a mask, saying he should carry a purse with it. The message was clear: To show vulnerability isn’t masculine.

Biden’s campaign suggests that not only can men express love for their family members, admit when they’re wrong and tear up in public — but that it’s also manly to do so.

“There are a lot of Biden tropes that link up with masculinity — protecting, serving, sacrificing, being the rock that the family can depend on,” said Matthew Gutmann, author of “Are Men Animals? How Modern Masculinity Sells Men Short,” and an anthropologist at Brown who has studied masculinity around the world.

As for Trump, Gutmann said: “I think the misogyny is front and center and absolutely essential to his total persona, his total appeal. And not just to men. A lot of women think that’s the way guys should be. They’re not just begrudgingly voting for Trump, but saying, ‘He’s a real man.’”

During the first debate, when Trump criticized Hunter, Biden responded with emotion: “My son had a drug problem. He’s overtaken it. He’s fixed it. He’s worked on it. And I’m proud of him.” In recent days, male Biden supporters flooded social media with their own photos of hugging their fathers or sons.

The Lincoln Project, a group of anti-Trump Republicans, released a new ad titled “Men,” narrated by Sam Elliott, the quintessential Hollywood cowboy. It shows fathers and sons changing a tire, throwing a football and embracing.

“Our dads weren’t perfect, but they did their best to raise us to be good, to be honorable, to be men of family and faith,” it says. “But above all, they taught us to own up to it when we did something wrong.”

Implying that one of those wrong things was voting for Trump last time, the ad concludes: “It’s time to own up, to be the men our dads raised us to be and the fathers our sons need us to be. It’s our turn to set the example.”

Honor and family are values that voters in either party would support. But the goal is to convince male voters that Biden is the candidate who most embodies the men they want themselves and their sons to be, said Rick Wilson, a Republican strategist and co-founder of the Lincoln Project: “We’re asking these people, ‘Are you going to defy your own upbringing, the things you know you should do? And if you choose not to, are you willing to watch your child’s behavior be modeled on Donald Trump versus what your dad taught you?’”

Though Trump’s version of masculinity appeals to a large segment of voters, both male and female, it has also repelled many of the white women who once supported him. This election has a large gender gap among voters, with women supporting Biden by 23 points, and just over half of white women supporting him, according to a national poll this month by The New York Times and Siena College. Biden may also have gained more college-educated men.

Now, Wilson said, they are making their case to less educated men, who were instrumental in Trump’s 2016 victory: “It’s a harder set of targets, but it’s more rewarding if we’re able to drop off even 2 or 3% of the men who voted for him.”

Sixty-seven percent of white men without college degrees support Trump, according to the Times/Siena poll. Also, a small but potentially significant number of Black and Latino men have shifted their support from the Democratic Party to Trump, in part because of the president’s macho appeal, analysts say.

Trump’s approach can be seen as a throwback to a time when men’s main role was to provide for and lead their family, researchers said. Trump’s children briefly greeted him in his office before and after school, recalls his first wife, Ivana, in her book “Raising Trump.” Today, he relies on his children professionally — both in business and politics — and publicly praises them, but is rarely seen showing them affection.

Biden has been fully hands-on with his children, and was their primary caregiver long before that became less of a rarity. He became a single father early in his career after his wife and daughter were killed in a car crash, and he helped care for his son Beau while he had cancer (he died of it in 2015).

“He’s lived that experience of ‘What will I do? I have to go to a meeting, and where will my kids be?’” said Cynthia Hogan, who served as Biden’s counsel starting in 1991 when he was a senator and again when he became vice president in 2009. “At that time — and I think even today — a lot of men really weren’t doing that.”

The two political parties in the United States have long differed along stereotypically gendered lines, as have voters, according to research by Monika McDermott, a political scientist at Fordham.

“The Democrats are the more feminine party: They’re willing to tax more and have bigger government because they’re willing to care for people,” she said. “Republicans are more about rugged individualism, being independent and fending for yourself.”

For the current candidates, their views of manhood are reflected in their policies and politics.

Trump prioritizes strength and patriarchy. “Don’t let it dominate your lives,” he said of the coronavirus, for which he was hospitalized. His foreign policy is called “America First.” He disparages or fires political enemies. At a rally this week, he told voters he wants to get “husbands back to work.” Though Trump has spoken of the need for family policies, he has delegated them to his daughter Ivanka, and very little has been done.

Biden has made caregiving a big part of his economic proposals, with a $775 billion plan to help young children, older adults and people with disabilities, and to increase pay for caregivers. He has drawn upon the grief he’s experienced to comfort families touched by the coronavirus. And he has promised to try to build consensus and share power — starting with his choice of a woman as his running mate, Kamala Harris.

“The gender norms around caregiving are changing,” said Ai-jen Poo, senior adviser for Care in Action, a nonprofit, and an expert on the care economy. “I think representation matters, and it’s not just in terms of race and ethnicity, it’s also in terms of experience. People want to see somebody who understands the kind of caregiving struggles they’ve been through.”

Still, as much as gender roles are evolving, the candidates that voters are choosing between are both straight white men in their 70s, and versions of traditional men and fathers. No matter the outcome, it will be at least four more years before America is asked to consider any version of a leader that breaks that mold.