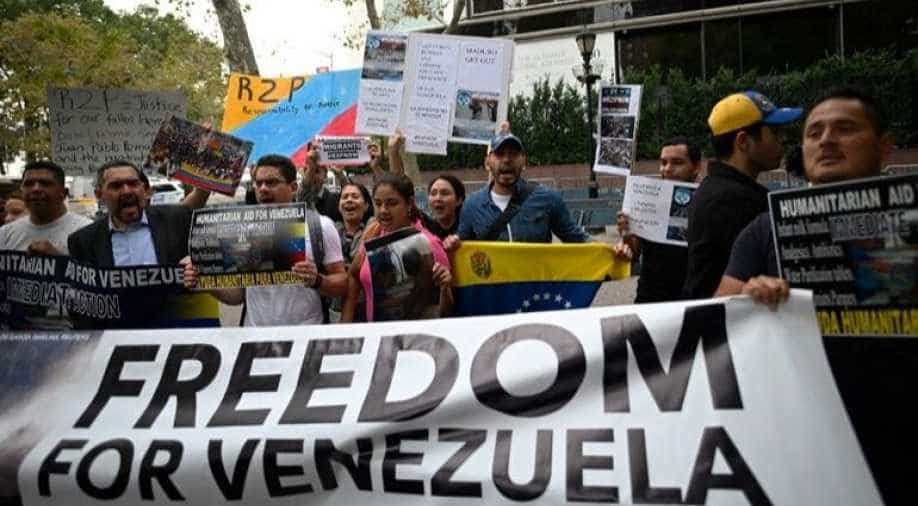 Supporters of the Venezuelan opposition at the United Nations Headquarters. Photograph:( AFP )

Venezuela's government should "immediately" cease labour violations, including detentions of workers who do not support President Nicolas Maduro, a UN agency commission said on Friday.

The Commission of Inquiry carried out by the International Labour Organization followed a complaint in March 2018 by the Venezuelan business association Fedecamaras.

The association accused Maduro's socialist government of systematically breaching the rights of unions and trade groups seen as supporters of opposition leader Juan Guaido, who has been recognised as Venezuela's president by more than 50 countries including the US.

The commission, which went to Venezuela in July, called for "the immediate cessation of all acts of violence, threats, persecution, stigmatisation, intimidation or any other form of aggression against employers' and workers' organisations that do not support the government," an ILO statement said.

The commission also demanded "the immediate release of any employer or trade unionist who may be in prison as a result of carrying out the legitimate activities of their workers' or employers' organisation."

Maduro's government has three months to challenge the inquiry and can take the case to the UN's International Court of Justice.

The Venezuela Commission of Inquiry is only the 13th such probe in the ILO's 100-year history.

Venezuela is suffering from a punishing economic crisis and a political standoff between Maduro's government and the National Assembly led by Guaido.

The oil-rich country suffers from hyperinflation and shortages of basic goods from food to medicine, a crisis that has forced some 3.6 million people to flee since 2016.