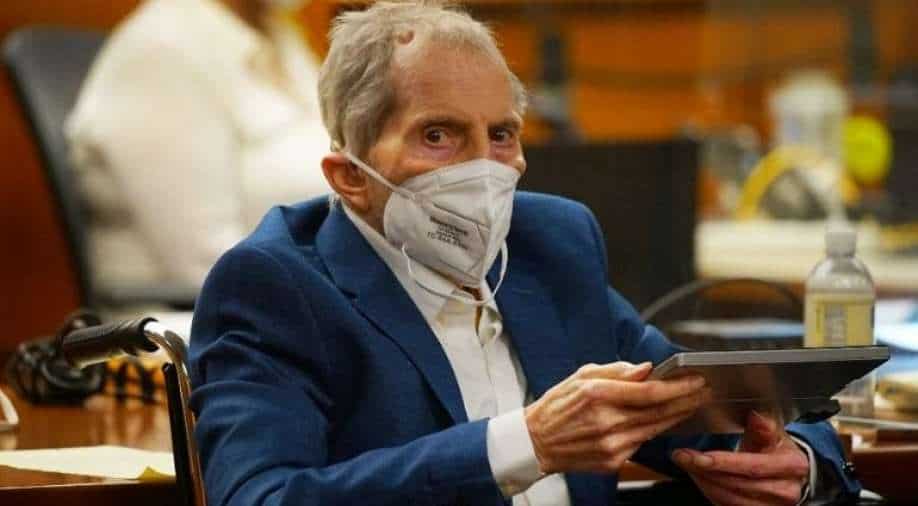 (FILES) In this file photo taken on May 18, 2021 Robert Durst holds a device to read the real time spoken script as he appears before Judge Mark E. Windham during court proceedings in his murder trial at Inglewood Courthouse in Inglewood, California. US real estate scion Robert Durst was on September 17, 2021 convicted of killing his best friend to prevent her talking to police about his wife's disappearance. Photograph:( AFP )

Robert Durst, a multi-millionaire who was the subject of explosive HBO documentary 'The Jinx,' had always denied that he shot Susan Berman in the back of the head in 2000 at her Beverly Hills home

US real estate scion Robert Durst was Friday convicted of killing his best friend to prevent her talking to police about his wife's disappearance.

Durst, a multi-millionaire who was the subject of explosive HBO documentary "The Jinx," had always denied that he shot Susan Berman in the back of the head in 2000 at her Beverly Hills home.

But a jury in Los Angeles took a total of just eight hours to find the 78-year-old guilty of the execution-style slaying.

Prosecutors had said he murdered crime writer Berman in December 2000 to prevent her from being questioned by New York police over the disappearance of his wife Kathleen two decades earlier.

Berman, the daughter of a Las Vegas mobster, had acted as a spokeswoman for Durst after he became a suspect in Kathleen's disappearance.

Durst, an estranged member of one of New York's wealthiest and most powerful real estate dynasties, was never charged in his wife's case.

He was arrested in March 2015 in a New Orleans hotel room in connection with Berman's murder, hours before the final episode of the HBO documentary "The Jinx: The Life and Deaths of Robert Durst" aired.

In the documentary's stunning finale, Durst is heard muttering to himself, "There it is, you're caught" and "Killed them all, of course" -- apparently unaware that a microphone remained switched on while he used the restroom.

The series also delved into the 2001 death of Durst's neighbor in Texas, Morris Black, who was found dismembered.

Durst admitted the dismemberment, but claimed the killing was self-defense. He was acquitted.

Durst testified for 14 days in a trial that gripped local media.

He repeatedly denied any involvement in Berman's death, but acknowledged he had written an anonymous letter to police telling them that her body lay in her Beverly Hills home.

Prosecutor John Lewin told the jury there was a "mountain of evidence" that Durst had killed all three people with whose deaths he had been connected.

He said a friend of Durst had testified that the real estate magnate had told him of Berman: "It was her or me. I had no choice."

"For the last 20 years, he's avoided responsibility for Morris Black. Durst is not jinxed. He's a three-time killer who has managed to escape accountability until this very moment."

Durst was not in court when the verdict was read because he was isolating following an exposure to someone with Covid-19.

He will be sentenced on October 18, and faces life in prison without the possibility of parole.