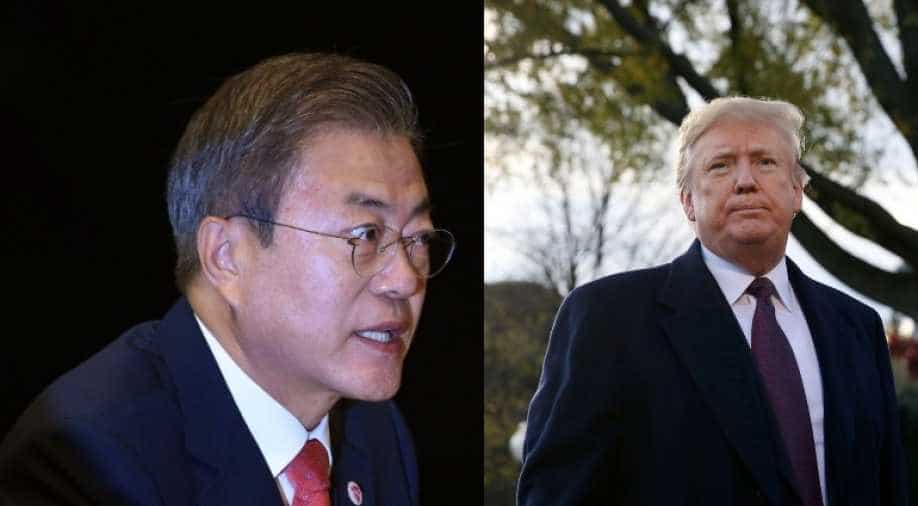 Foal Eagle is the biggest of the regular joint exercises held by the allies, and has always infuriated Pyongyang, which condemned it as preparations for invasion .

The United States and South Korea have scaled down an annual joint military exercise scheduled for the spring of 2019 to facilitate nuclear talks with North Korea, US Defense Secretary Jim Mattis said Wednesday.

"Foal Eagle is being reorganized a bit to keep it at a level that will not be harmful to diplomacy," Mattis said, adding that it would be "reduced in scope."

Foal Eagle is the biggest of the regular joint exercises held by the allies, and has always infuriated Pyongyang, which condemned it as preparations for invasion.

But the drill -- one of the world's largest field exercises involving 200,000 South Korean and some 30,000 US soldiers -- was delayed and scaled down last year as diplomatic detente took hold on the peninsula.

And following a historic summit with North Korean leader Kim Jong Un in Singapore in June, US President Donald Trump announced that the US would stop holding joint exercises with the South, calling them expensive and "very provocative".

Since then the two allies have suspended most of their major joint exercises including the Ulchi Freedom Guardian in August and Vigilant Ace, slated for next month.

But more recently progress in talks with the North has stalled, with the US pushing to maintain sanctions against it until its "final, fully verified denuclearization" and Pyongyang condemning US demands as "gangster-like."

Washington stations 28,500 troops in the South to defend it from its nuclear-armed neighbour, which invaded in 1950.

But differences are beginning to emerge between Seoul and Washington.

The South's dovish president Moon Jae-in has long favoured engagement with the North, which is subject to multiple UN Security Council sanctions over its nuclear and ballistic missile programmes.

He has dangled large investment and joint cross-border projects as incentives for steps towards denuclearization, while the US has been adamant pressure should be maintained on Pyongyang until it fully dismantles its weapons programs.

Seoul's defence ministry said Mattis' comments were in line with their shared view on the need to back diplomacy -- but a spokeswoman added that the question of whether the exercises will take place at all was "still under discussion."

"The Trump administration claims Pyongyang's suspension of nuclear and missile tests as the key achievement of its North Korea policy and the joint drills have been postponed as a kind of corresponding measure," Kim told AFP.

"As long as talks continue, postponing or reducing major US-South Korea joint exercises has become a fait accompli," he said.

Earlier this month Pyongyang threatened to "seriously" consider returning to its weapons drive if Washington did not end its tough economic sanctions.

And last month, the North's state media carried a near 1,700-word commentary accusing the US of playing a "double game", implicitly criticizing Trump for comments aimed at barring Seoul from lifting sanctions against Pyongyang.

US Secretary of State Mike Pompeo on Wednesday defended Washington's strategy on the peninsula, noting that North Korea had halted missile launches and had not conducted a nuclear test in over a year.

"And I do hope there'll be a summit between the two leaders early in 2019," he said in an interview with KCMO radio.

Pyongyang has declared its nuclear and missile development complete, saying it has no further need for testing.

Trump has also said he hopes to have a second meeting with Kim early next year, but talks between Pompeo and a top North Korean official, partly to prepare for the meeting, were cancelled.

The US said the North axed the talks because they weren't ready, and Trump insisted he was in "no rush."