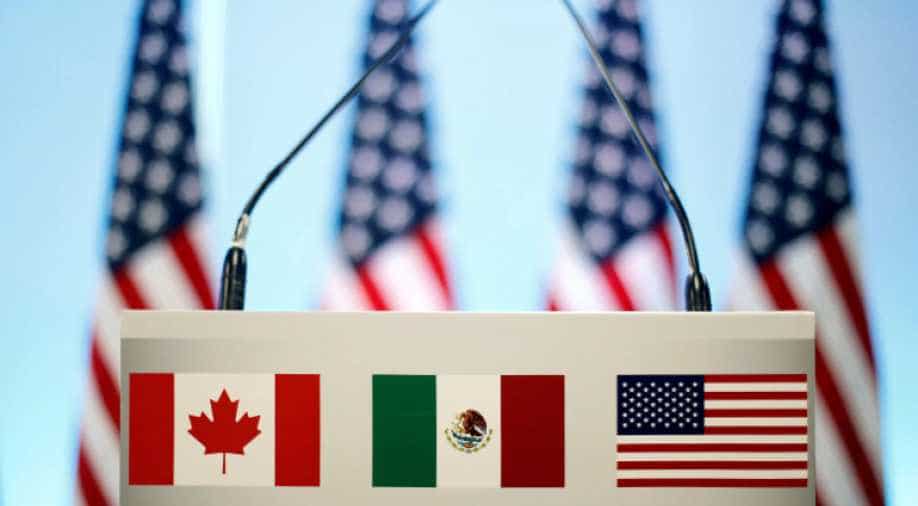 The flags of Canada, Mexico and the US. are seen on a lectern before a joint news conference on the closing of the seventh round of NAFTA talks in Mexico City, Mexico Photograph:( Reuters )

The United States and Mexico agreed on Monday to overhaul the North American Free Trade Agreement (NAFTA), putting pressure on Canada to agree to the new terms on auto trade and other issues to remain part of the three-nation pact.

US President Donald Trump and outgoing Mexican President Enrique Pena Nieto said talks with Canada would begin immediately, though Trump threatened he could put tariffs on Canadian-made cars if a three-way deal could not be reached.

"I think with Canada, frankly, the easiest we can do is to tariff their cars coming in. It's a tremendous amount of money and it's a very simple negotiation. It could end in one day and we take in a lot of money the following day," Trump said.

Negotiations between the three trade partners have dragged on for more than a year and repeated threats by Trump that he would ditch the 1994 accord have roiled financial markets, putting pressure on the Mexican peso and the Canadian dollar.

Officials said they hope Canada will agree to the terms by Friday, when the White House plans to formally notify Congress that Trump will sign the deal in 90 days. Congress has to approve it.

"There are still issues with Canada but I think they could be resolved very quickly," a senior trade official told Reuters in an interview.

If talks with Canada are not wrapped up by the end of this week, Trump plans to notify Congress that he has reached a deal with Mexico, but would be open to negotiations with Canada to join the pact, U.S. Trade Representative Robert Lighthizer told reporters on Monday.

Some Republicans in the US Congress called the deal a positive step but said Canada must be part of the new pact to avoid hurting US jobs.

"Millions of jobs in Texas depend on an updated NAFTA, and it’s important that we get this right," said Senator John Cornyn, the No. 2 Republican in the Senate.

Republican lawmaker Kevin Brady, chairman of the tax and trade-focused Ways and Means Committee, called on Canada to return to talks quickly "with the aim of concluding a modern, seamless three-way agreement."

Canada plans to continue to negotiate, but would only sign a new agreement that is good for the country, a spokesman for Canadian Foreign Minister Chrystia Freeland said. Trump said he would talk to Canadian Prime Minister Justin Trudeau soon.

The United States, Mexico and Canada do more than 1 trillion dollars in trade between them every year. The announcement of a US-Mexico agreement lifted financial markets.

Trudeau spoke to Pena Nieto on Sunday and shared their commitment to reaching a successful conclusion of NAFTA "for all three parties" the prime minister's office said.

The Trump administration said the deal improves labor provisions. The Mexico-US discussions focused on crafting new rules for the automotive industry, which Trump has put at the heart of his drive to rework the pact he has repeatedly described as a "disaster" for American workers.

Matt Blunt, president of the American Automotive Policy Council, which represents General Motors Co, Ford Motor Co and Fiat Chrysler Automobiles NV, said the group was optimistic about the new deal, though it was still reviewing the details.

The deal would require 75 per cent&nbspof auto content to be made in the NAFTA region, up from the current level of 62.5 percent, a US trade official said. A fact sheet describing the bilateral agreement specified the content would be made in the United States and Mexico.

The deal also would require 40 per cent to 45 per cent of auto content to be made by workers earning at least $16 per hour.

The United States and Mexico also agreed to a 16-year lifespan for the North American Free Trade agreement, with a review every six years that can extend the pact for 16 years, U.S. Trade Representative Lighthizer said.

The plan would not contain an automatic expiration for NAFTA as proposed in the prior US demand for a "sunset clause." Mexico also agreed to eliminate dispute settlement panels for certain anti-dumping cases, a move that could complicate talks with Canada.

US Mexican and Canadian stocks opened higher on Monday on optimism about a trade deal.

Mexican stocks jumped 1.4 per cent&nbspto a seven-month high, while the peso firmed about 1.3 per cent against the dollar, heading for its best one-day gain in more than a month.