US couple draw guns on protesters passing their mansion 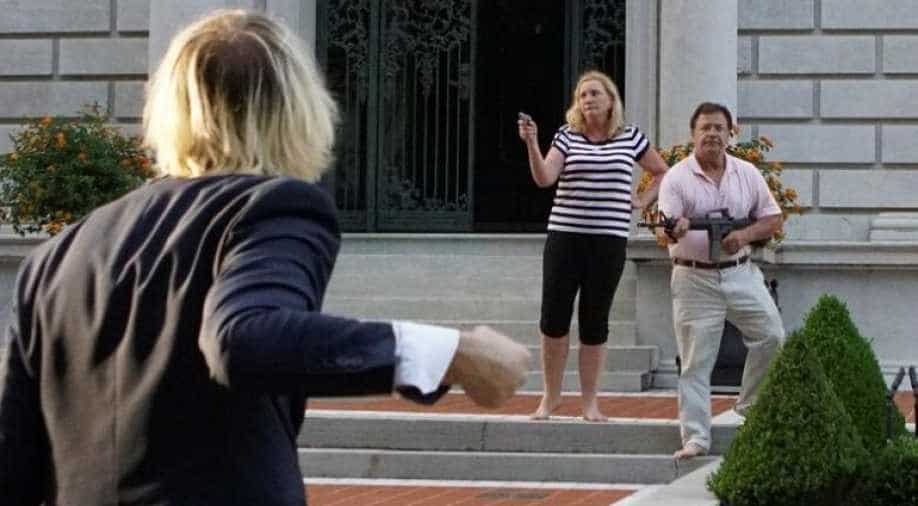 Mark McCloskey, 63, a lawyer like his wife, 61, told a local news channel they were 'terrified when the protesters arrived.

A US couple brandishing an assault rifle and a handgun confronted protesters outside their Missouri mansion in a viral video that was retweeted by President Donald Trump, sparking divided reactions.

In the video, Mark McCloskey wears a pink polo shirt and pleated khakis, with his wife Patricia is in a striped T-shirt and cropped pants. Both are standing barefoot in their garden in St Louis, Missouri, on Sunday evening as protesters marched down a private street to demonstrate in front of the mayor's house.

A St. Louis couple defends their home with guns as protesters march through their neighborhood:pic.twitter.com/LqzvrBSREu

Mark McCloskey, 63, a lawyer like his wife, 61, told a local news channel they were "terrified" when the protesters arrived.

"A mob of at least 100 smashed through the historic wrought iron gates of Portland Place (and) rushed towards my home where my family was having dinner outside and put us in fear for our lives," he told KMOV4, the local CBS affiliate.

"This is all private property. There are no public sidewalks or public streets," McCloskey said.

"I was terrified that we'd be murdered within seconds, our house would be burned down, our pets would be killed. We were all alone facing an angry mob."

"We must protect the right to peacefully protest, and any attempt to chill it through intimidation or threat of deadly force will not be tolerated," she tweeted.

"In Joe Biden's America your job is illegal, you are locked in your home, borders don't exist, MS-13 lives next door and the police aren't coming when the mob arrives," he wrote, referring to a gang founded in the US by Central American migrants.

"This is all of us," he added, attaching a photo of the couple to his tweet.

Trump retweeted without comment the video of the white couple pointing a semi-automatic rifle and a handgun at the protesters, the majority of whom were black.

The clip sparked outrage online. The attorney for St Louis, Kimberly Gardner, said she was "alarmed" to see "peaceful protesters were met by guns and a violent assault."