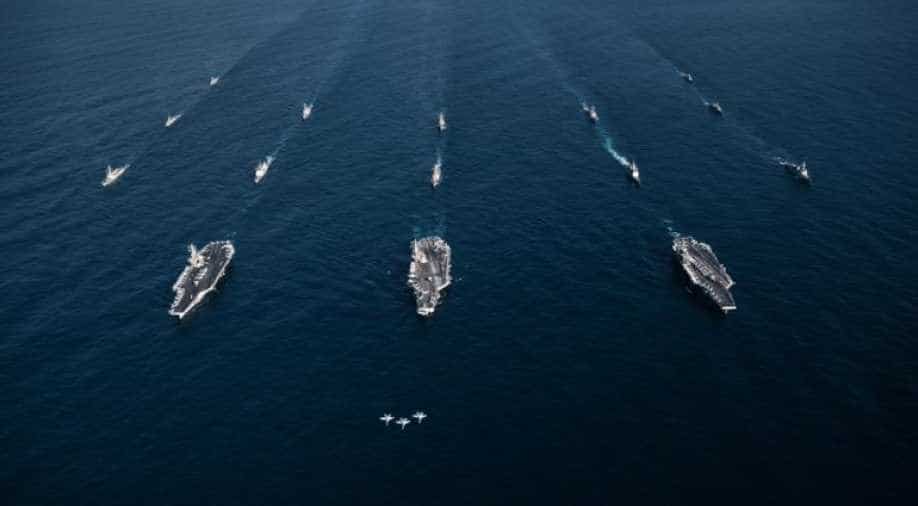 US Navy aircraft carriers USS Ronald Reagan, USS Theodore Roosevelt, USS Nimitz and their strike groups along with ships from the South Korean navy during a joint naval drill off the east coast of South Korea. Photograph:( AFP )

The South Korea conducted the exercise with seven vessels including three destroyers.||South Korean military said it was keeping a close watch on North Korea's military activities.

In a first, three US aircraft carriers carried out joint exercise off the east coast of South Korea on Sunday even as  President Donald Trump reached Manila for the ASEAN summit.

US warships USS Nimitz, the Ronald Reagan, the Theodore Roosevelt including South Korean naval vessels were involved in the exercise amid tensions in North Korea.

The South Korea conducted the exercise with seven vessels including three destroyers.

This is the first time all three US aircraft carriers are taking part at the same time in a military exercise in over a decade.

"The exercise is aimed at enhancing deterrence against North Korea's nuclear and missile threats and showing off preparedness to fend off any provocative acts by the North," a South Korean defence ministry spokesman said.

During talks with President Xi in Beijing last Thursday, Trump had urged the Chinese leader to do more to rein in the Pyongyang regime, warning that "time is quickly running out".

North Korea hit back saying Trump's current trip was "nothing more than a war-dealer's business of taking money from its allies' pockets", quoting a statement released by its foreign ministry.