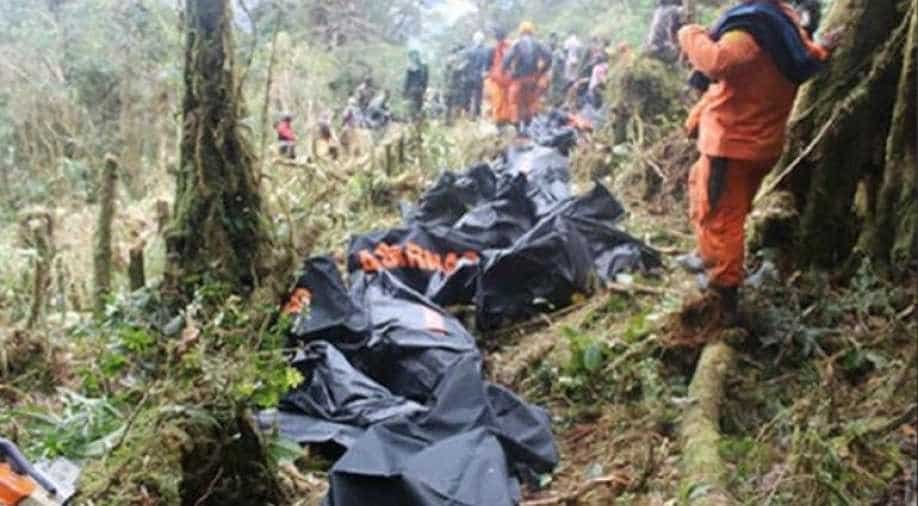 Representative Image of a wreckage of a downed turboprop plane. Photograph:( AFP )

Local media reported that Alice and Dylan Maritato, their mother Ornella Ellard and stepfather Brian Ellard, all died in the crash on Sunday at the municipal airport in Addison, Texas, about 15 miles (24 km) north of Dallas.

Federal investigators retrieved on Monday the cockpit voice recorder from the wreckage of a downed turboprop plane at a Texas airport as they looked into why it crashed soon after takeoff, killing 10 people, including a family of four.

Local media reported that Alice and Dylan Maritato, their mother Ornella Ellard and stepfather Brian Ellard, all died in the crash on Sunday at the municipal airport in Addison, Texas, about 15 miles (24 km) north of Dallas.

Four other passengers and two crew members have not been publicly identified while next of kin are being notified, according to the National Transportation Safety Board (NTSB).

Federal investigators, who have been at the scene since late Sunday, retrieved the cockpit voice recorder (CVR) and were downloading its contents in Washington. The device records conversations between crew members and air traffic controllers, NTSB Vice Chairman Bruce Landsberg said at an afternoon news briefing.

"We don't know exactly what is on the recorder," Landsberg said. "There may be some background noise that was picked up by the CVR, which will give us a better idea what's going on with the aeroplane itself."

Air traffic control radar and communications with the plane seem to have been normal, he said.

"The pilots were cleared for takeoff, they acknowledged takeoff and at this point, we are not aware of any further communication," said Landsberg, adding that investigators were also looking at the plane's maintenance and crew records.

Shortly after the Beechcraft 350i Super King Air took off from Addison Airport on Sunday afternoon on its way to St. Petersburg, Florida, it began to roll before slamming into a hangar and bursting into flames, Landsberg said.

The tail number of the plane, owned by EE Operations LLC, was in the process of being changed, Landsberg said.

Investigators have been able to determine that the plane's landing gear was down when it crashed, but it is unlikely they will be able to analyze other systems due to the extensive destruction and fire, Jennifer Rodi, an NTSB safety investigator said.

The crash ripped a large gash in the roof of the hangar, and damaged a helicopter as well as another plane inside, the NTSB said.

The NTSB said it may release a preliminary report on the crash within two weeks.