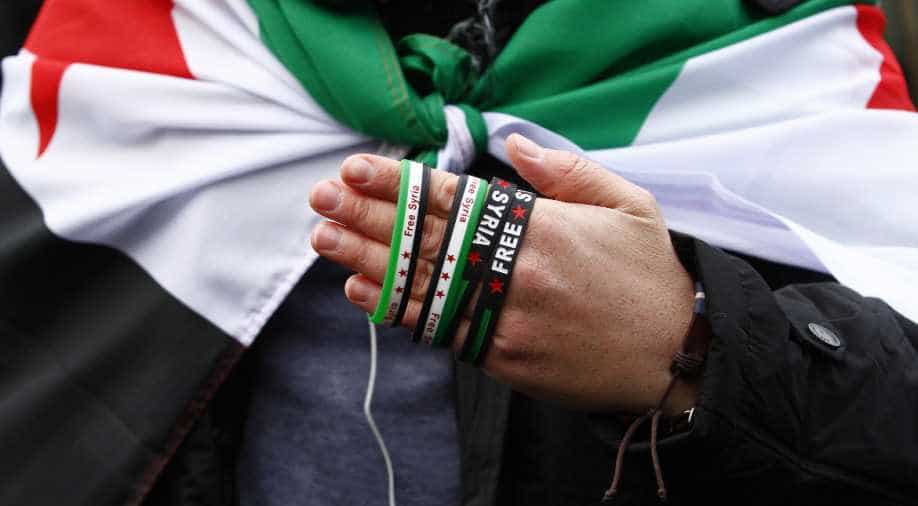 A protester distributes pro-Syrian bracelets during a demonstration to demand an end to Russian aerial bombing of the Syrian city of Aleppo in front of the Russian Embassy on December 7, 2016 in Berlin, Germany. Photograph:( Getty )

The UN General Assembly has agreed to set up a panel to gather evidence on war crimes in Syria, taking a first step toward prosecuting those responsible for atrocities in the nearly six-year war.

A resolution on establishing the investigative mechanism was adopted yesterday in the 193-nation assembly by a vote of 105 to 15, with 52 abstentions. The panel will work closely with the UN Commission of Inquiry which has submitted several reports detailing atrocities committed during the war that has killed more than 310,000 people.

Civil society groups have also been compiling documents, lists of witnesses and video footage that could one day be used in a court of law.

The measure prepared by Liechtenstein was co-sponsored by 58 countries including the United States, France, Britain, Italy and Germany as well as regional powers Turkey, Saudi Arabia and Qatar. Addressing the assembly, Liechtenstein's Ambassador Christina Wenaweser said the resolution would address the Security Council's failure to ensure those responsible for serious crimes face justice.

Russia, Syria's main ally, and China in 2014 blocked a request by the council that the International Criminal Court begin investigations of war crimes in Syria. "We are finally taking one meaningful step to meet the expectations that we have failed for such a long time," Wenaweser said.

Syria's Ambassador Bashar Jafaari slammed the measure, saying it was contrary to the UN charter and a "flagrant interference in the internal affairs of a UN member-state". Russia, China and Iran were among the countries that opposed the measure.

The resolution tasks the UN secretary-general to report within 20 days on the establishment of the new panel, which will be funded by the United Nations.

It will set up an "international, impartial and independent mechanism to assist in the investigation and prosecution of those responsible for the most serious crimes" in Syria since March 2011, when the conflict began.

The panel will "collect, consolidate, preserve and analyse evidence of violations of international humanitarian law and human rights violations and abuses and prepare files in order to facilitate and expedite fair and independent criminal proceedings," according to the draft text.

Human rights groups applauded the move. "By establishing the investigative mechanism, the General Assembly is helping pave the road to accountability after years of unchecked atrocities," said Balkees Jarrah, senior international justice counsel at Human Rights Watch. "Perpetrators now know that evidence of their misdeeds will be collected to hasten the day when they find themselves in the dock," she said.